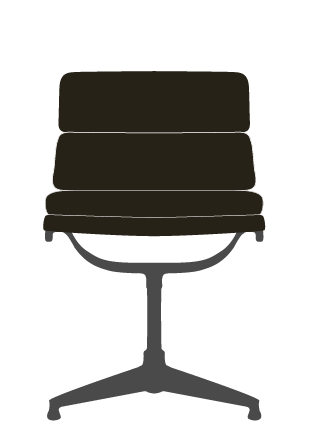 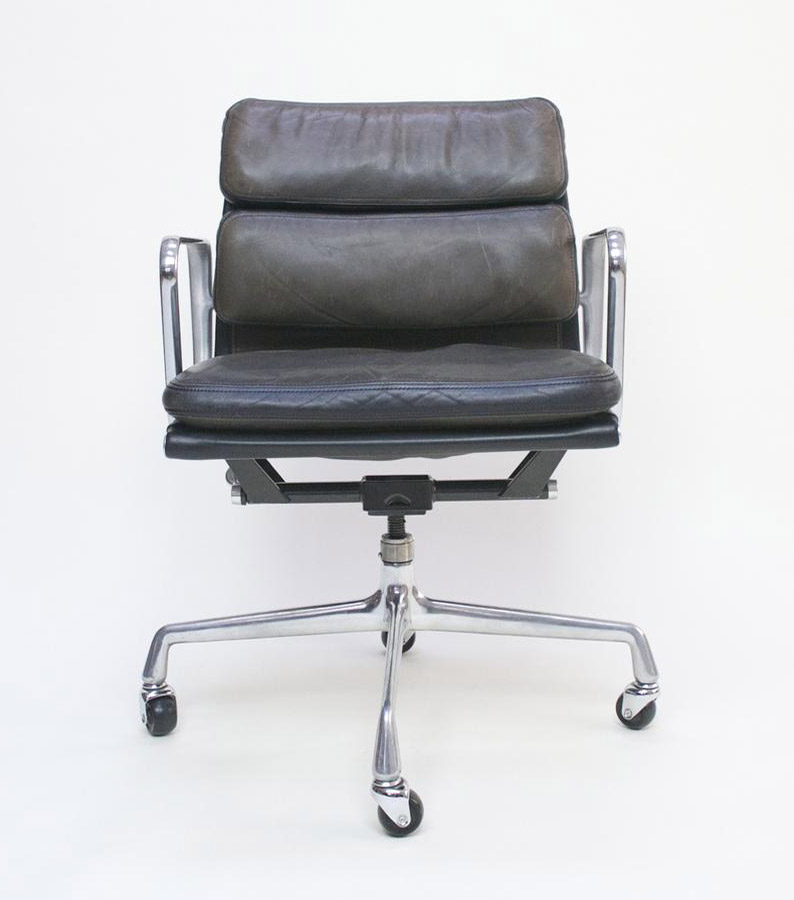 An addition to the Alu Group Series in 1969, the Soft Pad Low Back chairs were designed to be a luxurious and super comfortable seating option for a variety of uses. The models available on it's release mirrored that of the existing 'ribbed' Alu Group series and the versatility it presented was vast. Designed for the home, for conferences, for the professional workplace and for any commercial seating, the Eames Soft Pad Alu Low Back Chair was a go to option.

The Soft Pad Alu Low Back eames chairs were released in six variations, giving the intended user full control over the look and feel of the piece. There was the model without arms with either a fixed (EA205) or swivel (EA206) Universal 4-star base. Then there was the arm version, again with fixed (EA207) and swivel (EA208) bases. There was also the availability of the 'top end' arm chair, considered for the professional workplace, with a full tilting, height adjusting mechanism as standard and supplied with either castors (EA218) or floor glides (EA217).

Purportedly produced as an accident, it is said that the Soft Pad Chairs were inspired by an old aluminium chair with a prototype of the cushion for the Eames Chaise thrown over it. Whichever way it came into being, it has gone on to become one of the most recognizable chair designs of the 20th century and still inspires workplace chair design today.

The Eames Soft Pad Series also included a High Back Management Chair, a Lounge Chair, Recliner and Ottoman. The Low Back variants were reduced to 3 from the mid 80's change to the 5-star base but have since been brought back as customization options and on the old 4-star base once again.

The model numbers of all the Alu Group including the Eames Soft Pad Alu Low Back Chairs are a source of frustration and permanent misinformation due to the varying and changing codes through the years. Our full Alu Group Classification page gives details of all the group and changes but here are the model numbers, years and chairs for the Low Back Soft Pad:

Generations are often used to describe Eames pieces and designs but it is worth remembering that their interpretation can always be different and it is, after all, only opinion. What generations do though is give a buyer, collector and seller a method of aging, authenticating and of course valuing a piece 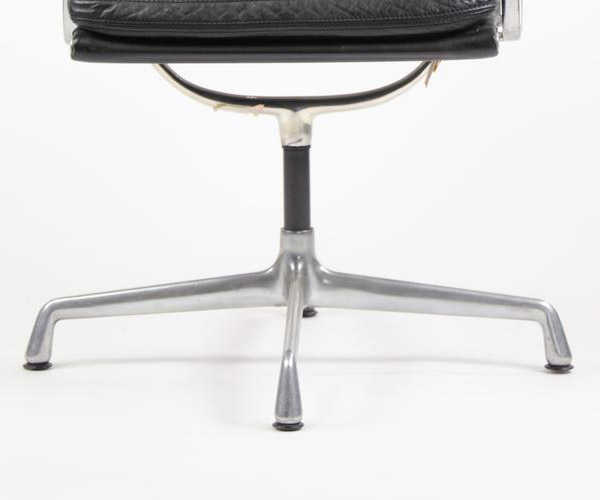 The Soft Pad Low Back Chair and its variants were released in 1969 on the Universal brushed Aluminum base with 4 legs. It was also initially only available in Black Leather with other fabrics and colors coming later on in the generation.

During the generation, in 1973 the group received a tweak and dimensional change which resulted in new model numbers. The 4 star base has also been more recently re-introduced. 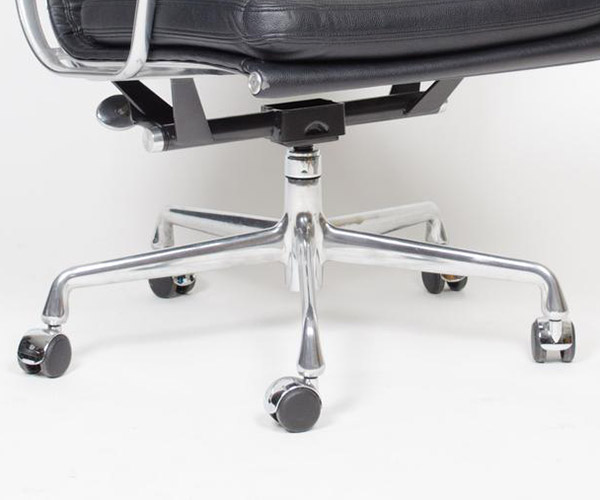 In 1985 Herman Miller introduced a new base for the Alu Group range as a whole. It developed the existing Universal base from 4 legs and into 5, providing added shape and stability to the chair, most important for workplace use.

The base was initially available alongside the first generation until 1993 when it took over completely. The 5 star base remains on the management chairs today but some of the other variants of the Low Back Soft Pads are now on the 4 star base again. 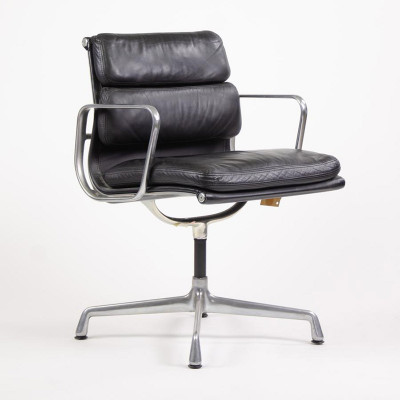 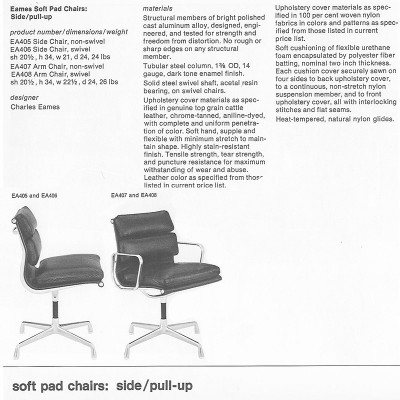 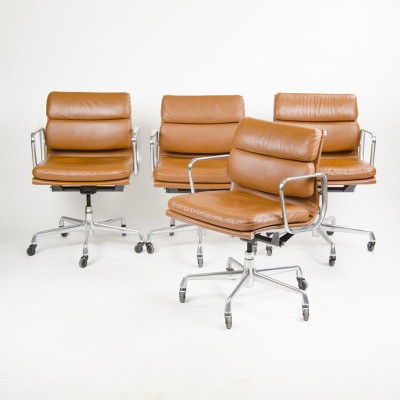 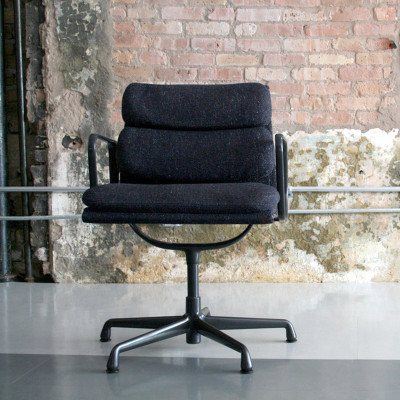 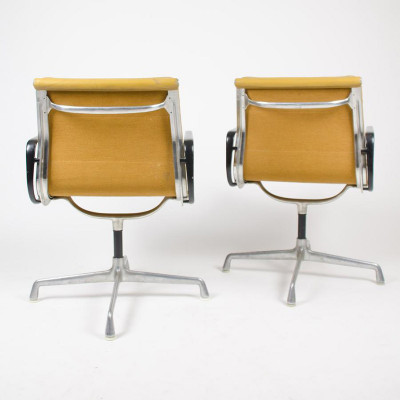 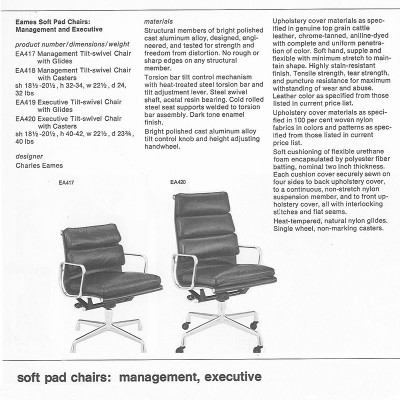 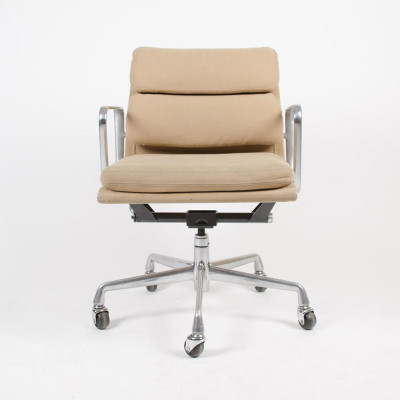 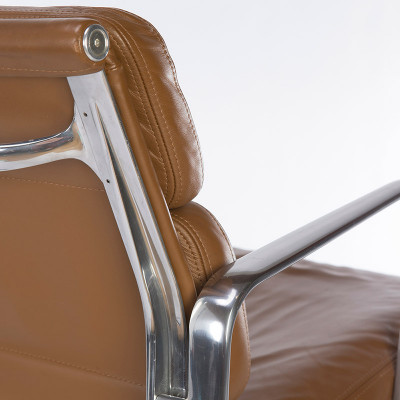