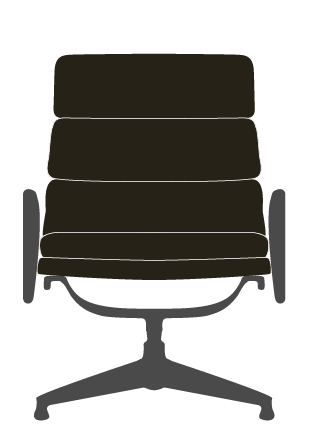 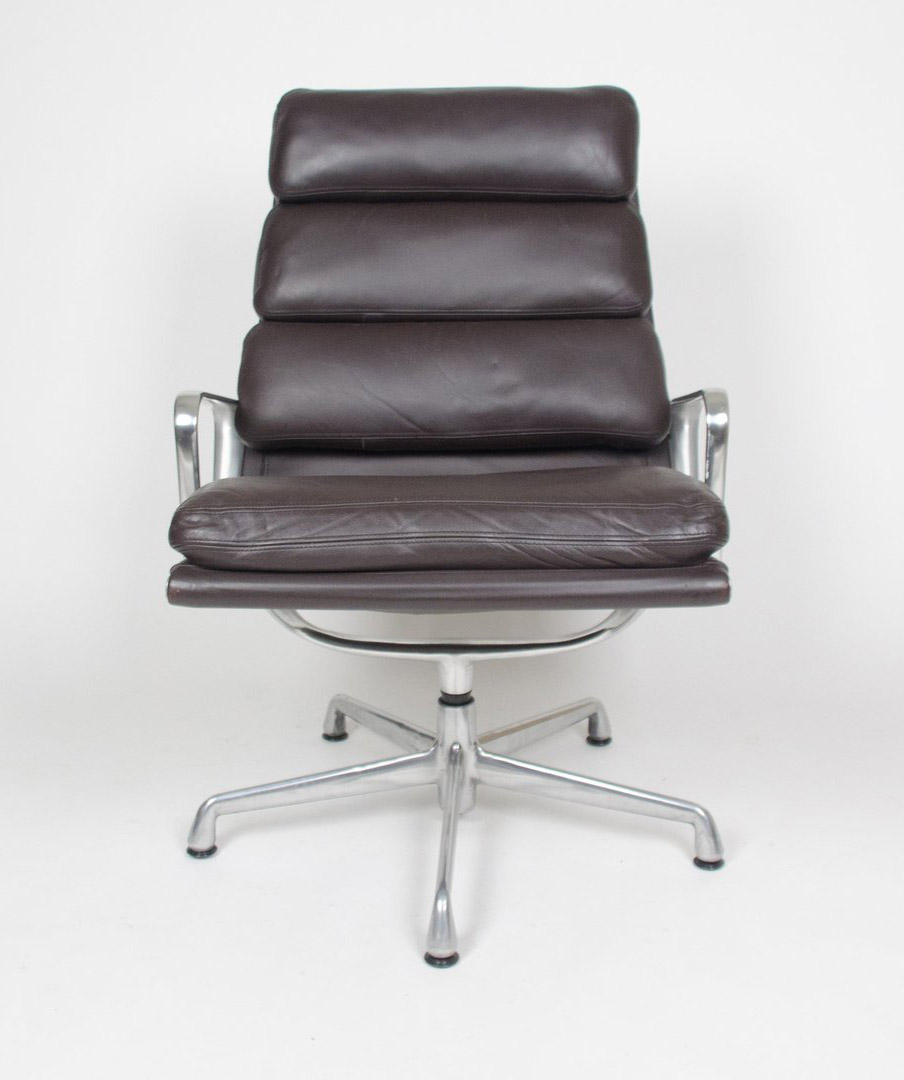 An addition to the Alu Group range and released to the market in 1969, the Eames Soft Pad Lounger had the same construction of the 'ribbed' Alu Lounger of 1958 but with the addition of three 2-inch separate cushions to the back rest and one larger seat padding. The chair was considered a luxury option, released primarily in only black leather and marketed as management, lounge and executive chairs.

The Eames Soft Pad Chair was initially released on the Universal (or Cruciform) base and in four variations; fixed position with arms (EA215) and without (EA213) as well as swivel with arms (EA216) and without (EA214). The whole Soft Pad series was released in every variation of that of the original 'ribbed' Alu Group chairs including the lounger, recliner, desk chair and ottoman. The product codes too mirrored that of the original Alu Group but with an extra starting digit.

Into the 1970's and the Soft Pad chairs were given more upholstery options including leather in Orange, Tan and Sierra as well as hopsack fabric editions. In 1973 the design of the Lounger was tweaked. It was actually shrunk in height by an inch but extended in depth by 2 inches, providing an even better sitting position and level of comfort for the user.

Further changes to the series would take place in 1985 when the 4 star base was changed to that with 5 legs. This stage also saw the four variants of the Soft Pad Lounger reduced to just one, coded EA433, with full swivel and arms. Since 2011, Herman Miller reverted the lounge Soft Pad back to the four star base that ended in 1985 and re-introduced the original code, EA422.

Designed and developed in 1968 and released in 1969, the Soft Pad Lounger has been in continuous production ever since.

The model codes for the Soft Pad Alu Group eames chairs changed during the years baffling collectors, buyers and sellers as they did. The codes literally mirrored those of the ribbed Alu Group chairs but with an extra digit always. Whereas the ribbed Alu chairs would have EA113, EA114 the Soft Pads would have EA213 and EA214 for example. The codes changed when the chairs were changed in size during the 70's and when the bases were changed. Our full Alu Group classification page lists all the known product codes, these are those for the Soft Pad Lounger. 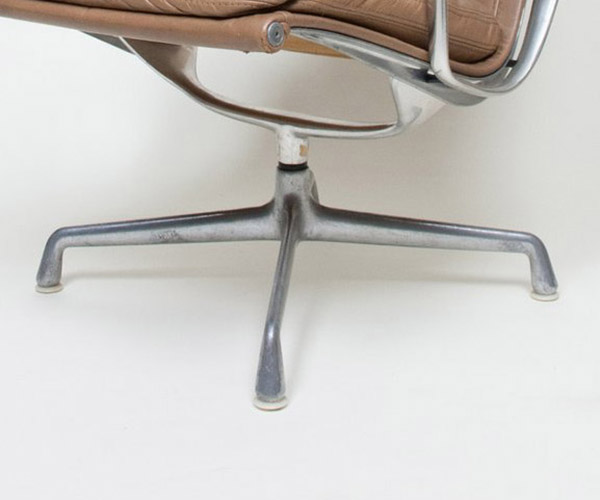 The Soft Pad Lounger, first released in 1969 sat upon the Universal Base. The base had 4 legs and was also known as the 'spider' base or the 'cruciform' base. There is also a distinctive arc underneath the base of the frame the lounger.

The 4 star base has legs in a lateral cross which dispersed the weight evenly to each foot section. The lounger and base was available in either a fixed or swivel version, depending on the taste of the buyer. Following the second generation base it was re-introduced in 2011. 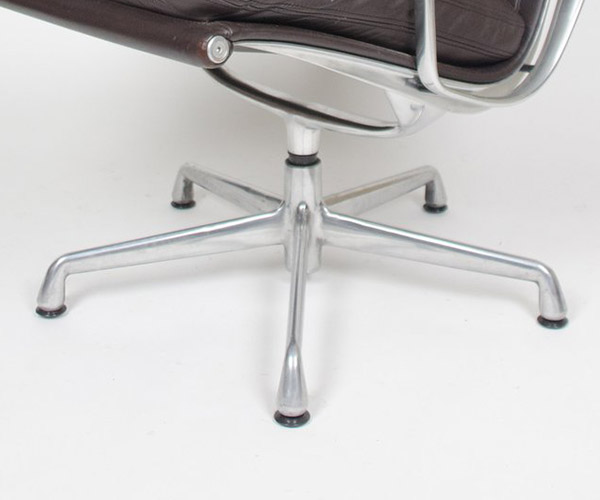 The 2nd generation of the Universal base had 5 legs creating a 'star; pattern

In 1985 the entire Soft Pad range had a change of base. The Universal (or Cruciform) base was retained but the shape was altered from 4 legs to 5 creating a star variant. It is believed the thinking behind the change was that additional stability was achieved with the fifth additional leg.

During the period of the 2nd generation 5 star base the number of options of the Soft Pad Lounger was reduced from 4 down to just one, the EA333 with swivel function and arms. This lasted until 2011 when Herman Miller re-introduced the 4 star base once again. 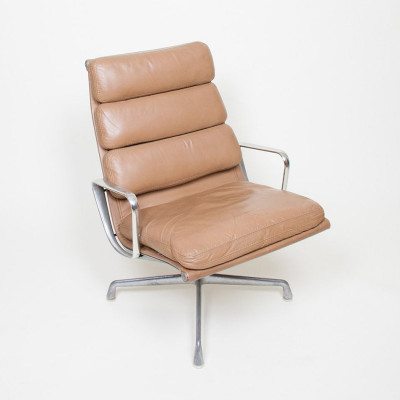 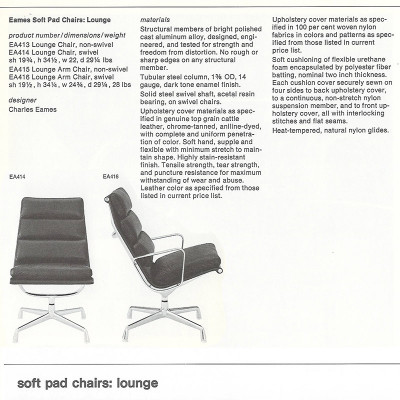 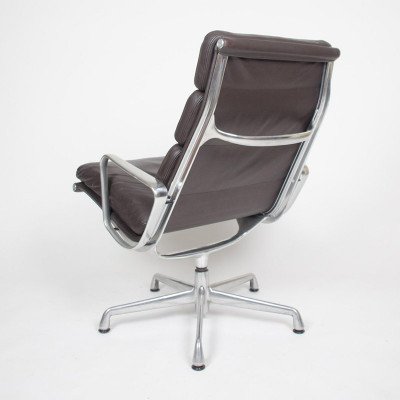 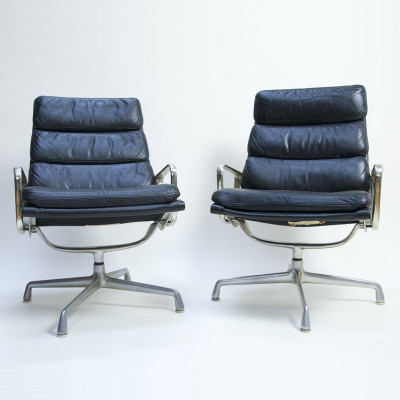