The Meaning Of Eames Authenticity

Our Eames.com Wiki and Marketplace is only interested in original, vintage or authentic Eames pieces with designs made and released during the working lifetime of Charles and Ray Eames. We consider the meaning of authentic to represent the products and designs made by the original manufacturers and factories and those licensed to reproduce them. In this article we explore what is meant by Eames authenticity.

Our philosophy is that we consider an original and authentic ‘Eames piece’ to be so (whether made in 1950 or 2020) as long as it is manufactured by either the original maker, or one that is licensed and authorized to do so since.

Successful and popular designs will always attract copying, whether direct copies or 'inspired' versions. There will always be differing opinions on what is right and wrong and it is never black and white. Whilst on the one hand there could be clear commercial damage to the authentic source, others argue that in fact the reproduction industry helped keep Eames designs relevant.  Whereas some take an aggressive stance on copies, others realize that originals and copies don’t generally share the same marketplace.

So why do we only believe original or licensed manufacturers make the only authentic versions, even if they appear the same as many copies?

Well the answer to this is simple. The original manufacturers, take Herman Miller for example, maintain the highest quality components and parts. They ensure that each item that leaves the factory is quality tested and the exact specification of the design, right down to the tiny dimensions of each piece. From what we have seen, mass produced reproductions always use cheaper metals, plastics and components. Although functional and in the style of the design they are substandard in every way and so the famous saying goes “In this world, you get what you pay for”. 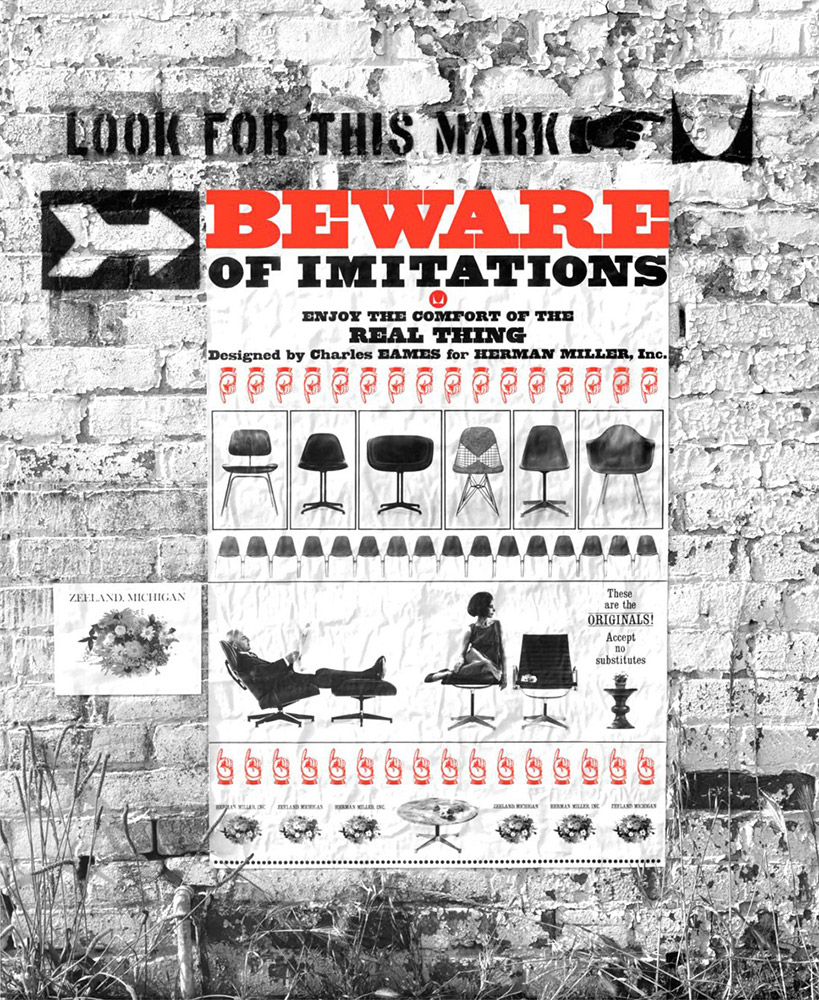 The famous 1963 Herman Miller poster 'Beware Of Imitations' was publicly released to raise awareness of copies in the marketplace and the same message is as relevant today as it was when the poster was conceived.

Whats In A Label?

Labels are the first port of call when checking Eames authenticity. Through the decades and across all manufacturers and item types, labels and logos were almost always present and are the best give-away of an original piece. There were a great many labels and stamps and you can find them all on our comprehensive page where we detail where you may find them and in what years.

But can labels themselves be reproduced? It cannot be ruled out and we have previously been aware of some emanating from Europe. Label copying however is thankfully extremely rare and in 99.9% of the times that you find an Eames product label it is going to be fine. But nevertheless it is always good to look out for other tells of what makes each design authentic. All of our Wiki design pages contain excerpts of what to look out for to help ensure authenticity in your Eames pieces. 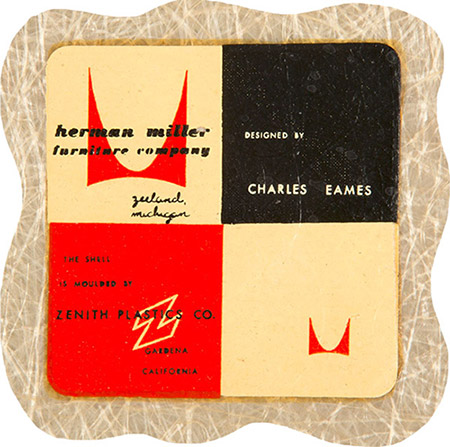 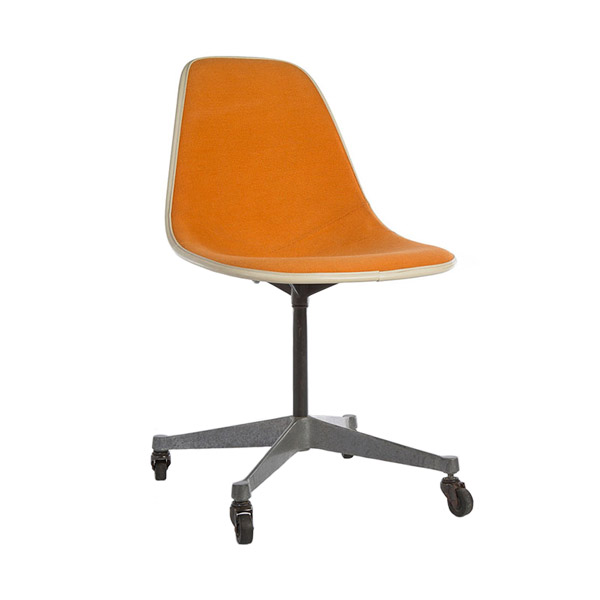 For the most part, many of the Eames pieces have a simple yes or no when it comes to authenticity. The fiberglass chairs (both arms and sides) are not always so straightforward however. The reason for this is the ease of interchangeable parts and the sheer number of aftermarket alternatives. Replacement bases for example are legal in many countries, but not and covered by copyright in others. It is possible for example to find original tops with replacement bases and or feet, shock mounts or other parts.

We believe that there are 3 types of Fiberglass chairs:

1.       Vintage Original (Both Top and Base are matching vintage age)

2.       Authorized Original (Top is vintage sitting on a later replacement factory made authorized base)

3.       Semi - Original (Top is vintage or new authorized but sits upon a reproduction base of non-authorized origin)

It would be fair to say that value ought to reflect the piece being sold in order of 1 (higher) to 3 (lower). The reality is however that most fiberglass chairs are sold unaware of the origins.