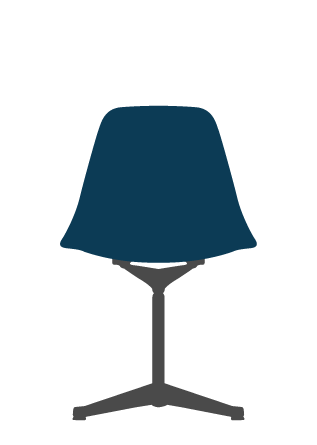 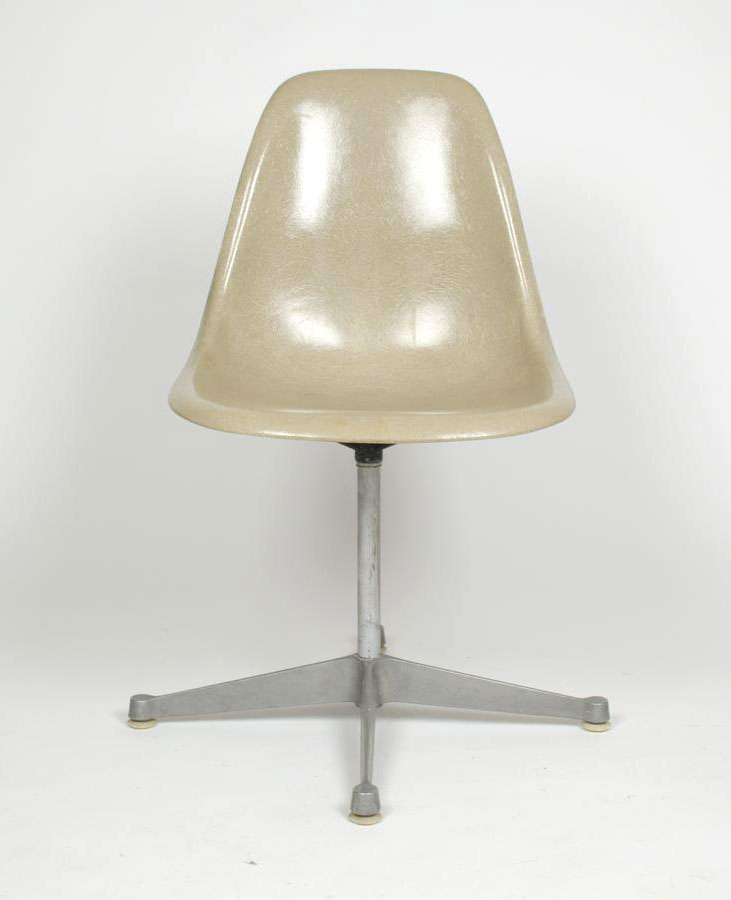 The Eames PSC Chair is the abbreviation for the Pivot (P) side chair (S) on Cast Alu Base (C). The later PSCC version is with added castors (C). Part of the fiberglass series of side chairs, the PSC was visually very different from the other bases with its black sleek single column design tailing off into a star shaped cast alu and steel base.

The Eames PSC Pivot Chair was made to the same height as the other side chairs and were sold as both work and dining variants although it is likely most of the sales were for the latter.

The pivot action had replaced the defunct DSW by the mid 1950's and created a solid and stable rotating option for the plastic chair series. With the DSW discontinued the PSC was sold alongside the Eiffel DSR, four legged DSX and the scholastic DSS.

The first generation of the PSC was a 4 legged star-base very similar to that later used on the lounge chair ottoman, with shiny alu top, adorning black stem and lower base.

In 1957 the base of the PSC was replaced with the more versatile contract base (and European lounge chair base) with rounder ends and a wider floor spread. This new base was able to have castors as well as floor glides and therefore the Eames PSCC Pivot Side Chair became possible.

The post 1957 PSC base added a new dimension to the chair because this type of aluminium base with the rounder feet could take both glides and castors, and thus, the PSCC was also born. The newer, more versatile contract base would be then go on to be used for the entire duration of the product.

The chair was available in many colors of fiberglass or upholstered with fabric from Alexander Girard, the chief textile designer of Herman Miller. 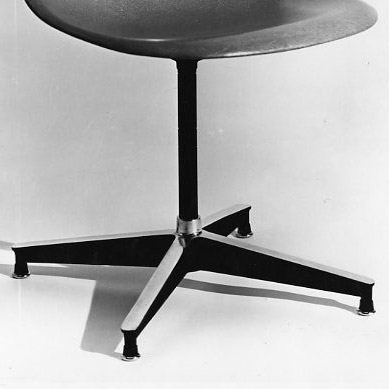 The first generation base is made from cast aluminium, black sides with polished leg tops

The 'spider' cast base had 4 legs, criss-cross, thicker at the center column, push on boot feet. 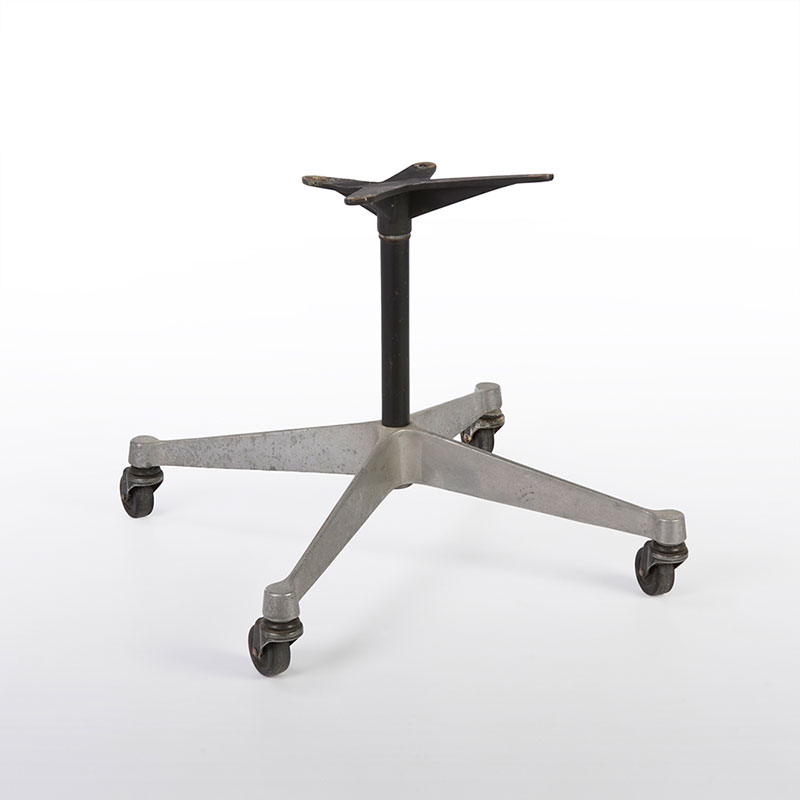 From 1957 the newer 'contract base' was used for the PSC

The contract base could use both push in floor glides and castors.

With castors the PSCC (pivot, side chair castors) was born 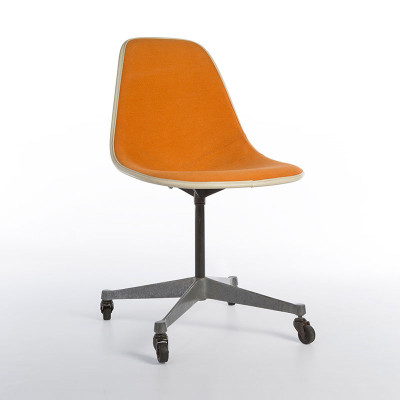 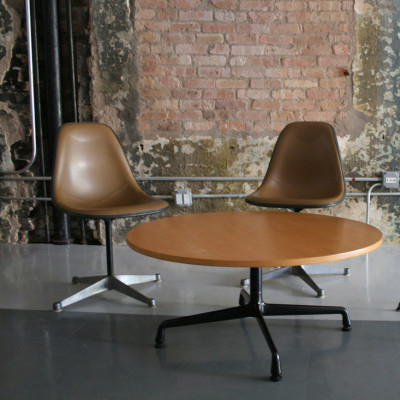 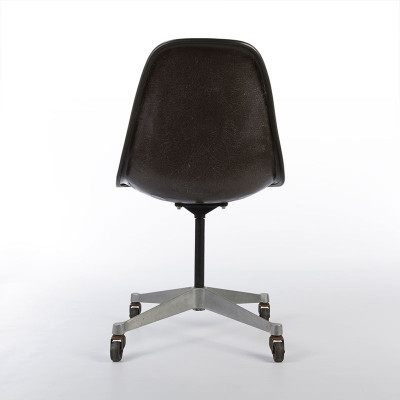 Rear Of Fiberglass PSCC Side Chair 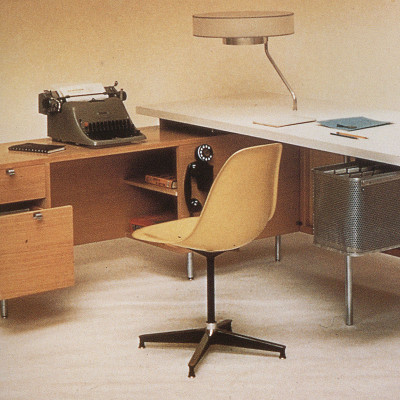 PSC In The Workplace - Herman Miller 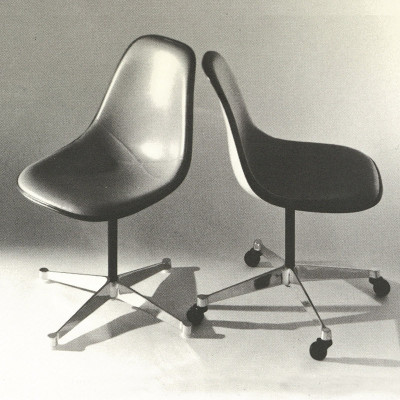 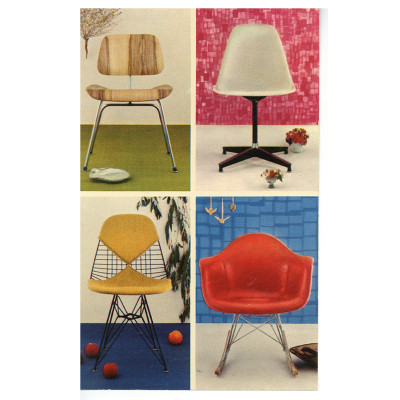 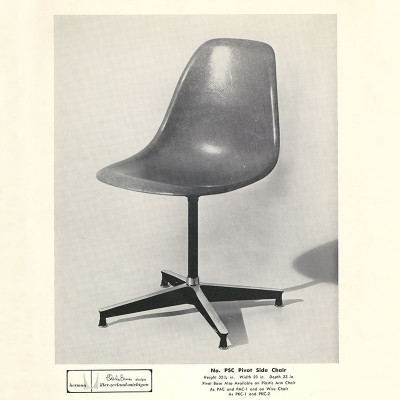