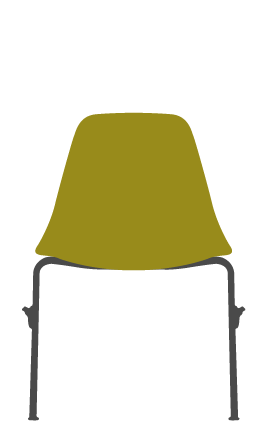 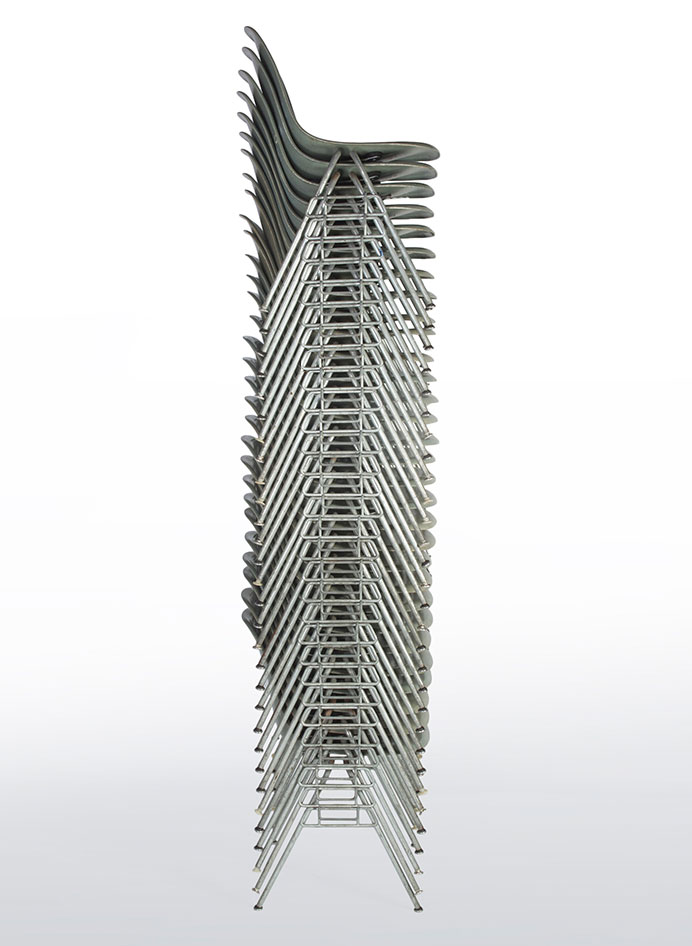 Arriving in 1955, the fiberglass Eames coded DSS stood for Dining (D) height, Side (S) chair, on Stacking (S) base. The Eames DSS Chair came with many variants, the DSS-N which had no side hooks for ganging lines of chairs together (although all others did come with this feature).  The DSS-TA with a moving tablet table, model 0715 with fixed tablet table, 0716 with a fixed arm rest and 0717, chair only but with the possibility to add tablet/arms in the future. Codes changed through the 1970's but the available models remained largely the same.

As you can see, the DSS was extremely versatile and that super quality along with some mighty fine efforts from Herman Miller's salesmen, led the Eames DSS Stacking Chair to becoming the most popular institutional chair of choice! Herman Miller documents from 1957 show that they had sold countless numbers to stadiums, hospitals, schools, colleges, universities, clinics, government offices and many others in as little as 2 years! It is the DSS therefore that helped, perhaps more than any model, to put the Eames plastic shell chairs into modern folklore, because we all used them at one point or another and recognize them instantly.

As the numbers sold continued to grow, the DSS was manufactured across all factories and in a plethora of shell colors too. Commercial use shells were available in more base colors than the home market and you could even commission your own color for an order of only 200 tops. Avid collectors will tell you that finding a collection of hidden or stored DSS chairs is more likely to yield some of the rarer seen colors.

Apart from bare shells, the choices were made endless with upholstery by Alexander Girard in a multitude of different options and colors, allowing any institution to personalize their purchase as they saw fit.

DSS chairs were mostly made with what is called ‘wide mount configuration’ in that the shock mounts and base attachments were not in the more regular narrow position, but wider, we believe to make the stacking process easier. It is the bane of collectors therefore in having to remount the chairs they wish to use more ‘home’ friendly bases onto. 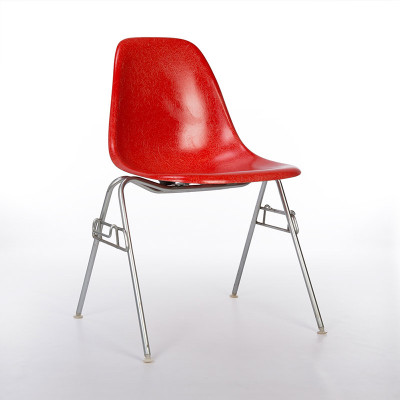 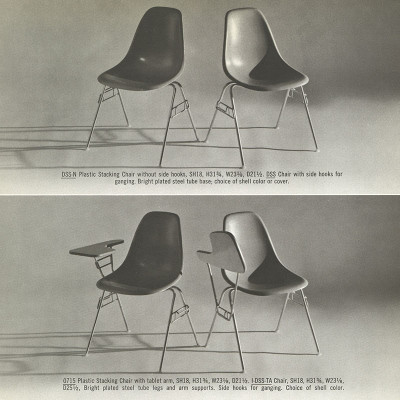 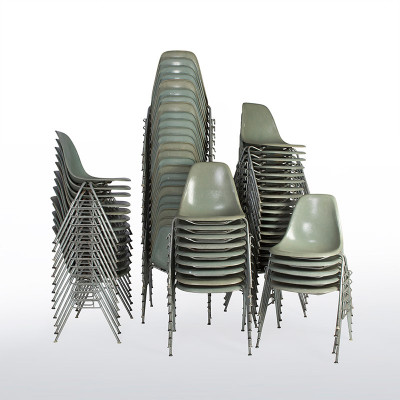 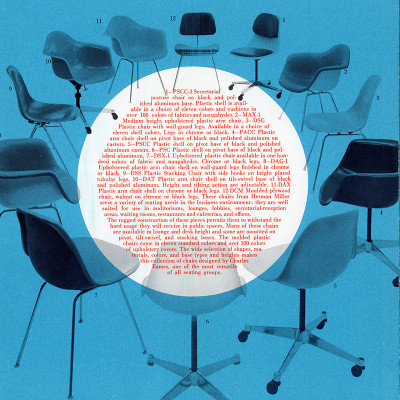 Original Herman Miller brochure with DSS alongside other in plastic range 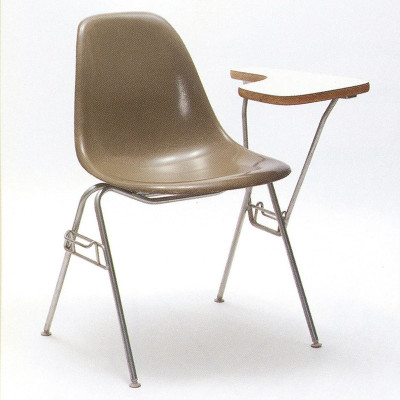 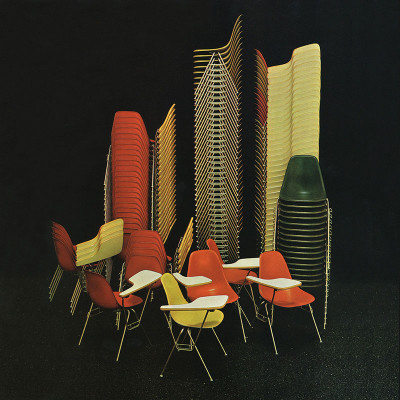 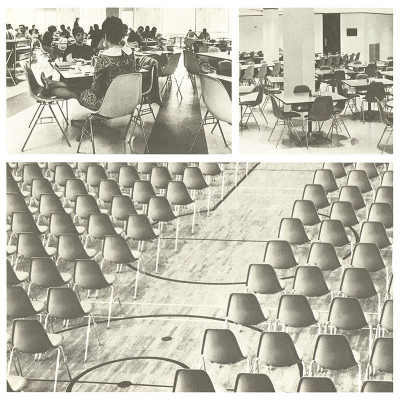 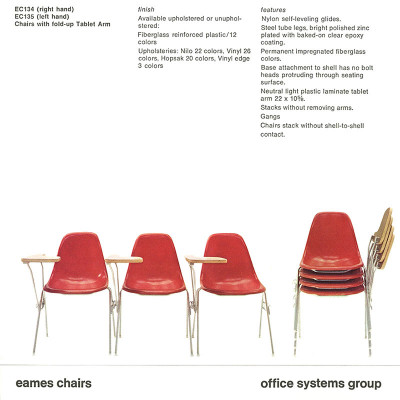 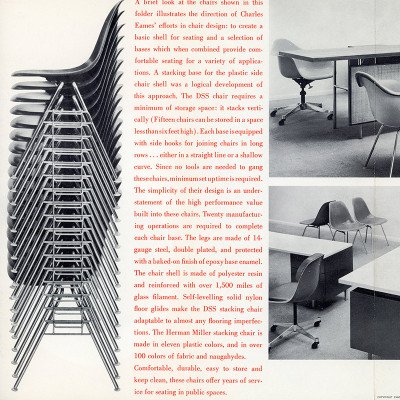 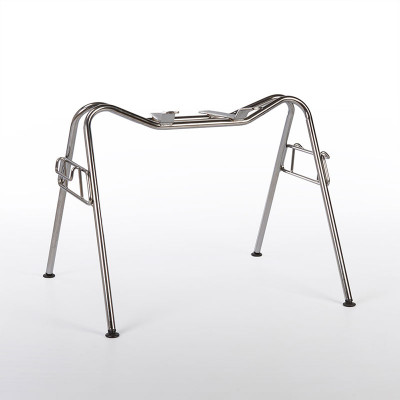 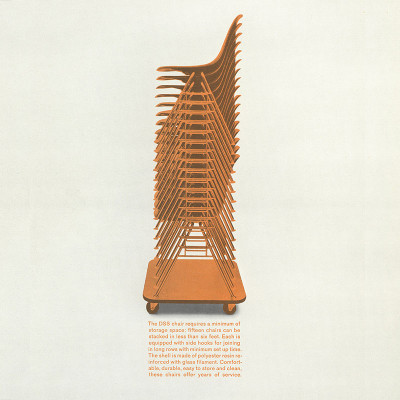