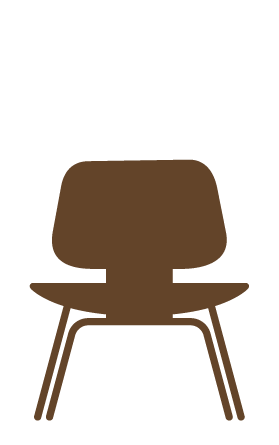 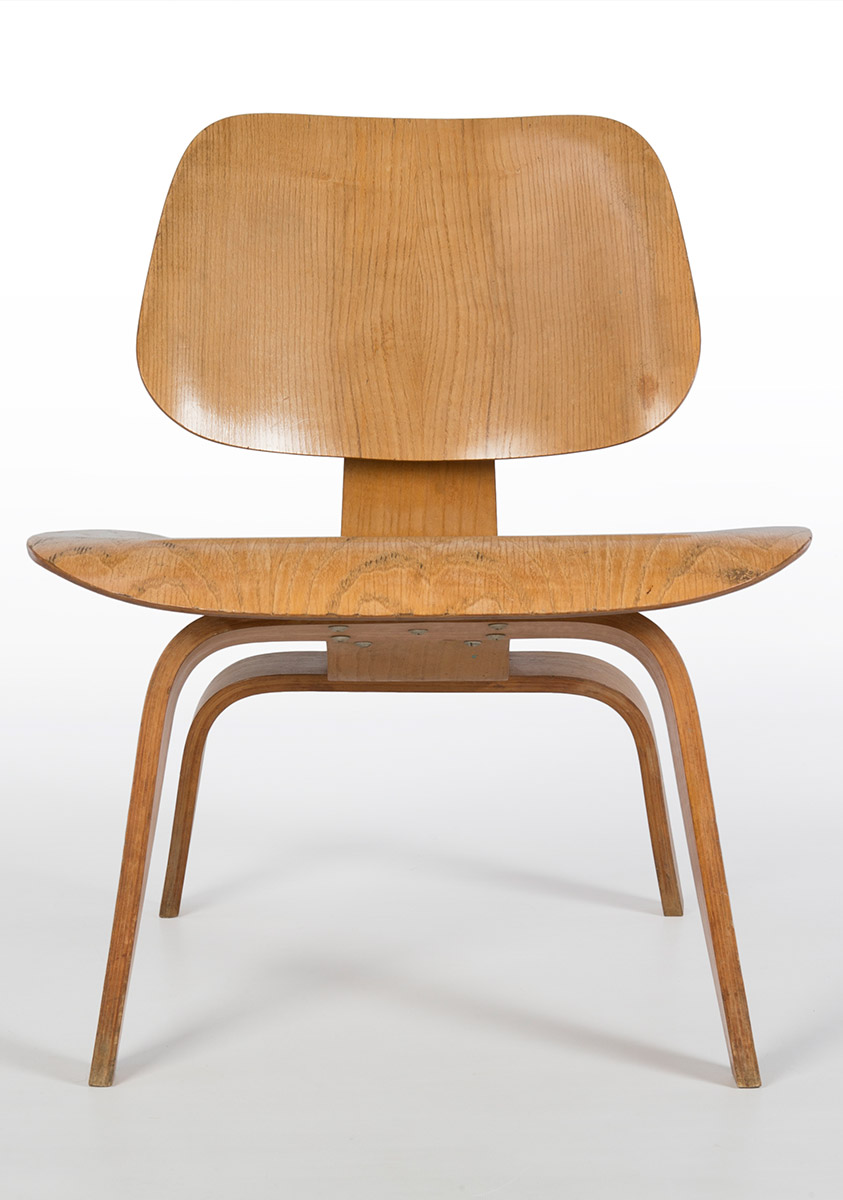 From the first of the plywood series, the abbreviated Eames LCW Chair was the Lounge Height (L) Side Chair (C) on Wood (W) Base. Designed by Charles Eames and first manufactured by the Evans Molded Plywood Division, the chair has long gained classic status.

The techniques used to make these unique chairs had been developed during the war years and was evident in the Eames Splint, made for and utilized by the US Navy. The Eames LCW Plywood Chair is constructed of five layers of plywood, glued and heated using a specialist machine, in order to bend the wood into the form of the design.

By 1946, four plywood adult chairs had been developed for market release as well as the child's nested chair. The Eames LCW Side Chair had a dining height sister chair (DCW) and the two were replicated with metal bases in the DCM and LCM. The group as a whole would soon become known as the ‘Eames Chairs’ and was marketed as such through the early 50’s.

The LCW was a wonderful fusion of five separate molded plywood forms. The support was made up of two curved legs of different sizes and a formed spine. The back rest and seat were then fixed to the support via rubber shock mounts kept largely from view. The result was a chair of visual beauty and something of a revelation for the post war period.

The LCW was first developed between Charles Eames and the Evans Molded Plywood Division. Herman Miller was drafted in to distribute the furniture in 1947 and later went on to buy the rights and operation to the whole catalog in 1949, a start of an amazing design partnership.

The LCW was available in varying wood veneers and colors. The very basic upholstery of the early versions would soon be updated by Herman Miller’s involvement, especially with the designs of Alexander Girard.

As the 1950’s moved on and new designs and materials became fashionable, the demand for plywood furniture slowed. Herman Miller kept the DCM and LCM on the books but sadly the LCW was discontinued in 1957 but re-commissioned in 1994 and remains available today.

A video introduction to one of the earliest Charles and Ray Eames success stories, the Plywood LCW Chair. First manufactured by Evans Molded Plywood in 1946, Herman Miller took over distribution a year later and production by 1949. The video showcases a later edition Walnut veneer LCW that is entirely sympathetic to the original 1946 design which has changed very little since. Herman Miller discontinued the LCW in 1957 but thankfully re-introduced them as part of the 'Home Classics' range in 1994, using a variety of wood finishes since then.

Up for sale is a beautiful, loved example of an original 'Red Stain' 2005 Eames LCW Lounge chair for...

It is necessary to point out that 'generations' of furniture designs don't actually exist in the form of intentional changes with the very pre-meditated thought that they will be used in the future for the aid of authenticating, ageing and valuing.

Generations happened naturally, as normal tweaks and an evolution of a design, perhaps even down to availability of parts as well as designated improvement. We interpret the most important changes and form them as 'generations' in order to help classify for the buyer, seller and collector. 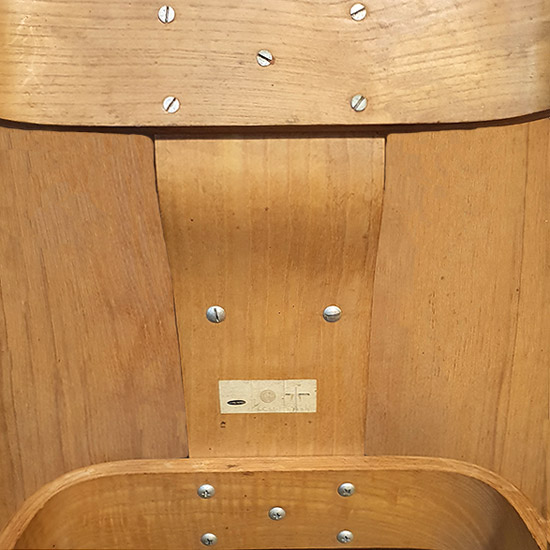 The easiest method to spot the first generation LCW is find one of the Evans labels, if they are surviving, which will be the medal, paper or foil labels.

Look for the 1st generation screw pattern, with seat face down is five two five (5-2-5), only found on this generation

The screws at the top are always wood screws, with shockmount bolts making up the rest of the 2 and bottom 5 combination.

The first generations are rarely found with upholstery in leather, fabric or slunk skin (calf hide) 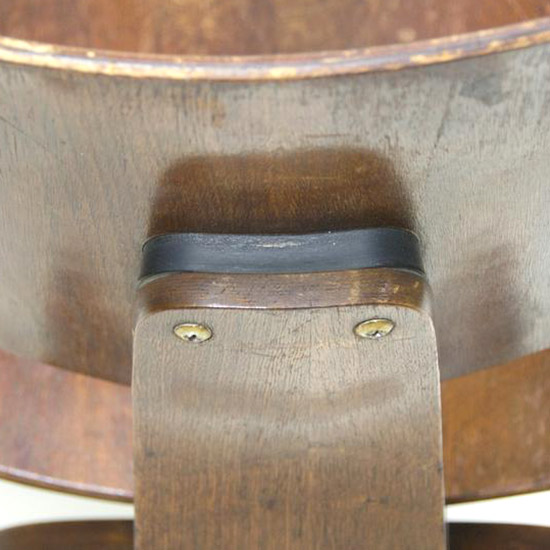 Evans versions of the LCW did not have any additional feet attached the ends of the wooden legs. Extra feet found on these versions may not be original.

The LCW first generation has a long shaped oval shock mount for the back rest to spine section of the chair.

Some of the very early versions of the plywood LCW were laminated in Melamine in order to preserve it during use however it was found to react with sunlight and turn white.

Early Evans examples can also be found in dyed aniline colors of red and black. Estimated 1946-1950 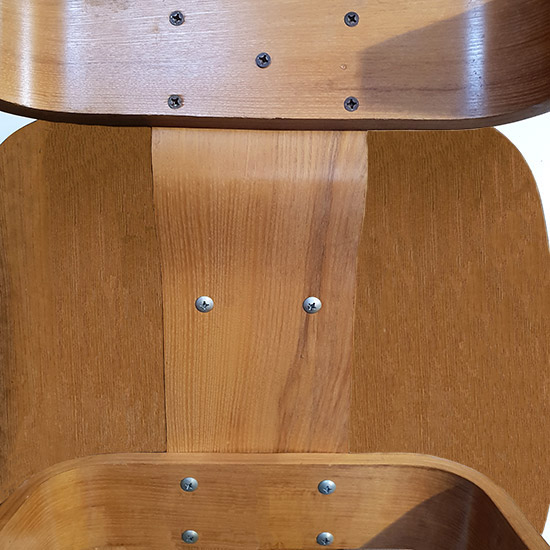 Herman Miller purchased the rights of the plywood LCW chair in 1949 and by 1950 was beginning to produce their own versions of the design.

The initial refinements to the design were subtle but one of the easy changes to spot was the changing of the screw pattern to a five two four combination (5-2-4).

This new screw pattern alongside one of the Herman Miller labels will show a second generation piece. Labels include the foil strip, half board and medallion. 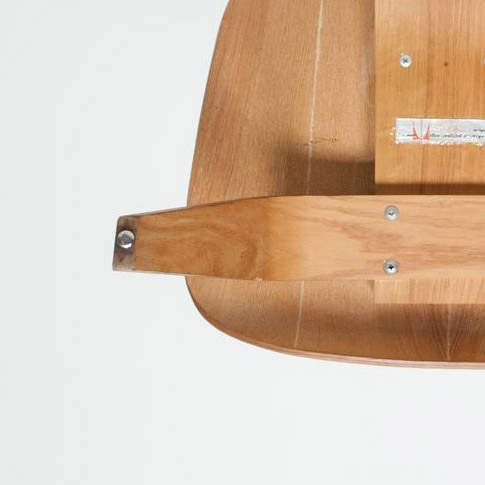 The small circular aluminum feet of the second generation LCW

The other indicator of a second generation LCW (first Herman Miller) version is the addition of small aluminum feet to the base of the plywood leg sections.

Herman Miller kept the oval shock mounts of the Evans version as well as the dyed red and black and upholstered version but introduced some new options of their own.

The LCW 2nd generation was cancelled from the catalog in 1957 due to falling sales. 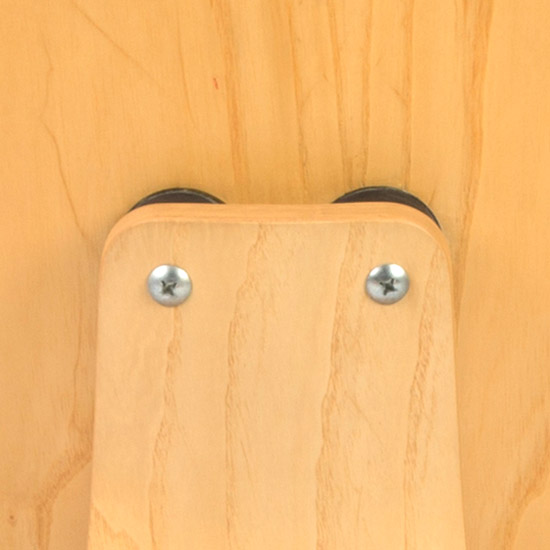 In 1994 Herman Miller re-issued the LCW chair to the marketplace.

The most obvious change, apart from modern labels, is the changing of the large oval shock mount to two separate circular ones on the back rest.

Herman Miller has made the LCW available in differing wood types since the re-release including oak, ash and Santos Palisander as well as a degree of upholsteries. 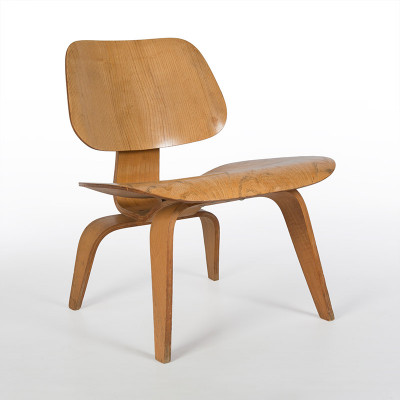 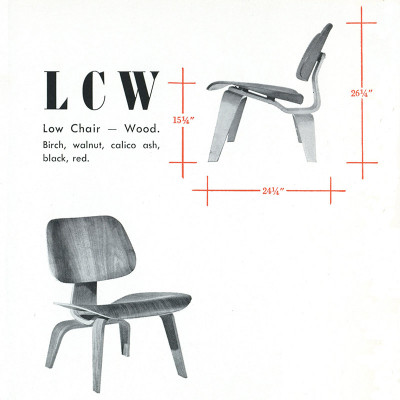 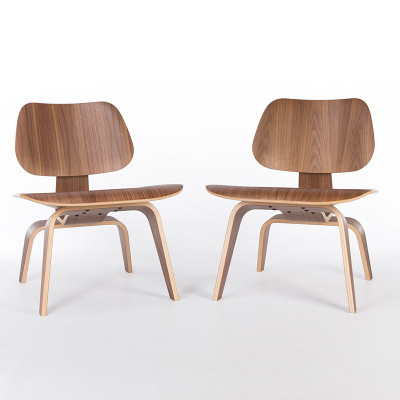 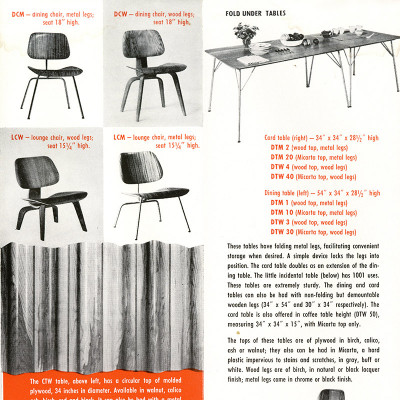 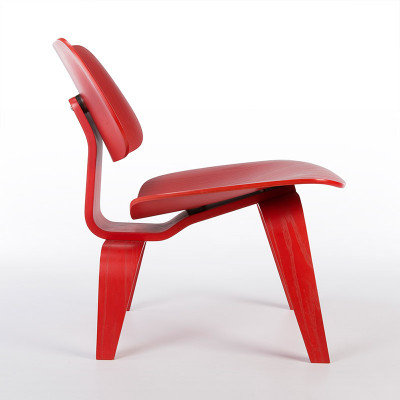 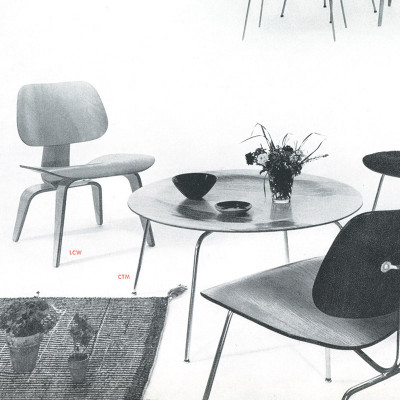 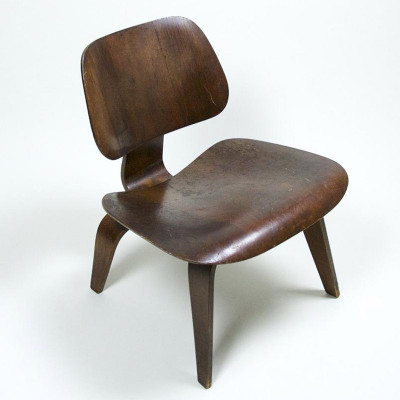 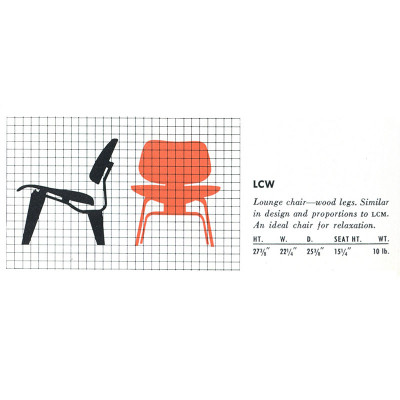 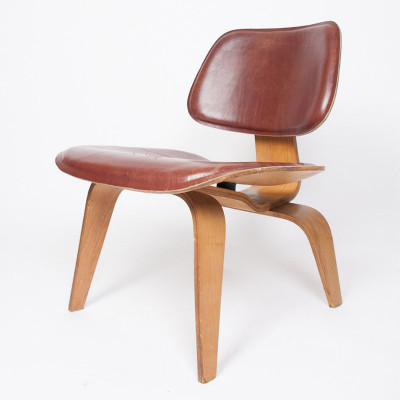 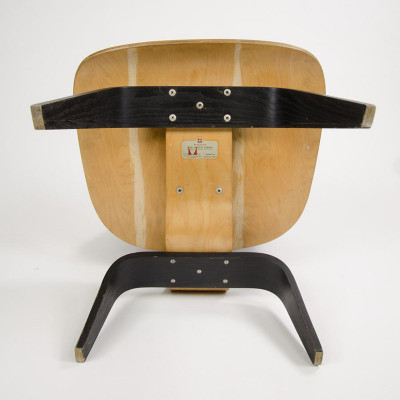 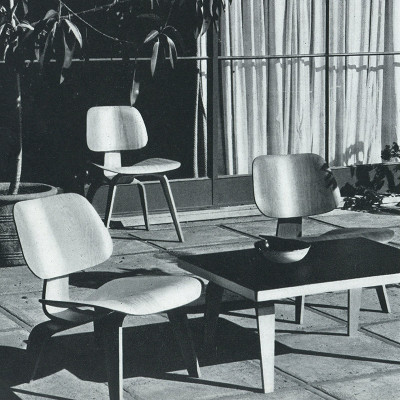 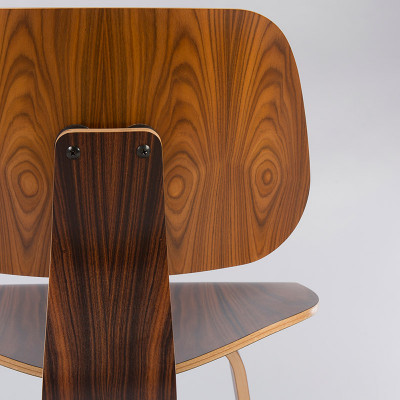