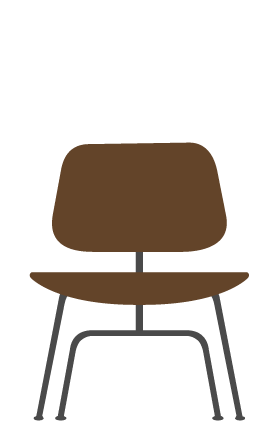 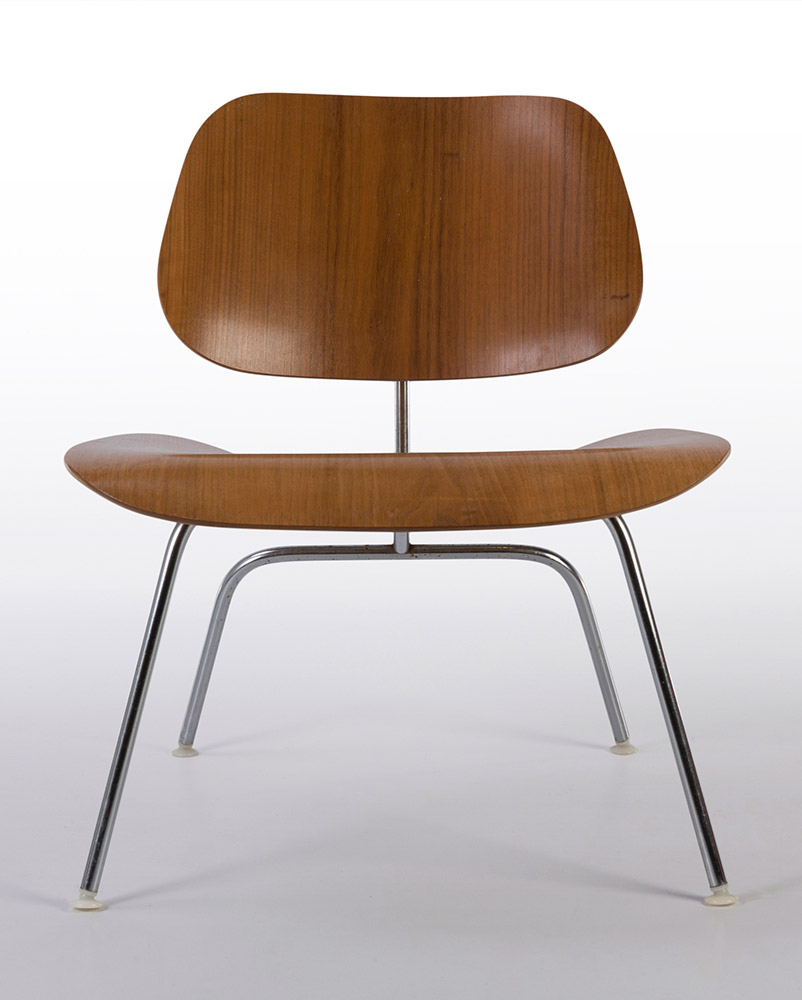 The Eames LCM Chair was the abbreviated name of the famous 1946 Lounge Height (D) Side Chair (C) on Metal (M) Rod Base. The LCM was the lounger edition of the metal leg plywood chairs developed by Charles Eames in collaboration with the Evans Plywood Company.

The end of the second world war enabled Charles to bring together the experimental plywood techniques he had helped to develop, and his long-time interest for furniture design. The result was a series of four chairs which went on to be defined in history as ‘the Eames chairs’. The LCM was one of the first four adult chairs to be released using the new material along with the dining version DCM and the wood leg DCW and LCW chairs.

Although most were made in the readily available Birch or Ash, the Eames LCM Side Chair was made in a great number of other woods including Walnut and later on, Rosewood. They were also upholstered by factory fabrics and those later designed by Alexander Girard for Herman Miller.

Many of the plywood products ceased to be produced by the end of the 50s largely due to new trends and new materials being available to designers. They were of course superseded by the arrival of the plastic chair series but even they were based on the idea of changing bases and tops started with the plywood range. The LCM and sister DCM however were spared and continued to be produced through the decades until now.

The Eames Plywood Lounge Side Chair was first made by the Evans Plywood Company, in Los Angeles California. After some time production was shifted to Grand Lake in Michigan whereby the Herman Miller company was the principal distributor. In 1949 the Evans company sold the furniture range and all its rights to Herman Miller whom continued the production through the decades.

Part of the first group of commercially released furniture designs by Charles and Ray Eames, the 1946 LCM was one of two lounge chair options in the newly developed post war molded plywood. Initially manufactured by Evans, Herman Miller took over full production from 1949 and have made the design, without interruption, ever since. Over the years they have released the chair in a whole host of veneer finishes including Rosewood, Calico Ash, Walnut, Cherry and Palisander. The video showcases a beautiful, original and authentic Herman Miller made LCM from the early 1960's, made using the popular Calico Ash with mid color tones.

A fantastic version of this iconic chair. An original used Herman Miller Eames LCM chair has been fi...

There is no such thing as a 'generation' of a chair, not in real terms anyway. We can however, pinpoint certain periods of metamorphosis and natural evolution of a piece of furniture which helps us to define age, maker and potentially value. This is what we define as a generation!

Below are generations of the plywood LCM lounge side chair, first brought to the market in 1946 and where it continues even today. 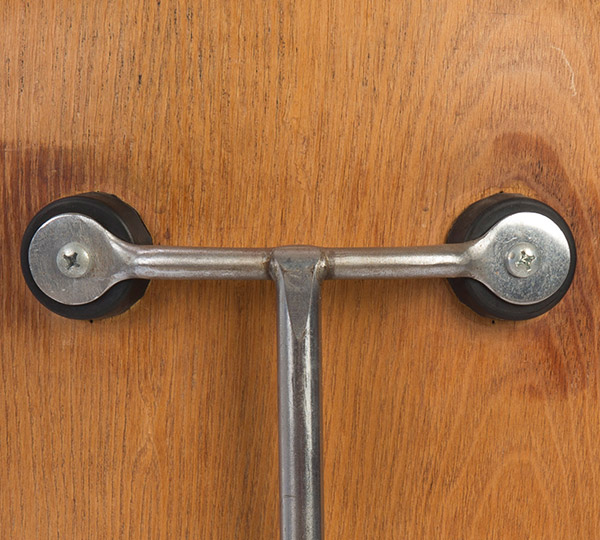 1st edition LCM chairs should have one from a few different labels by the Evans Plywood Company.

Without a label, turn your attention to the metal frame itself to help identify.

First generation Evans LCM chairs have round connectors where screwed to the back rest.

The actual metal frame was made from solid cast and the feet called 'domes of silence' made from alu and rubber. 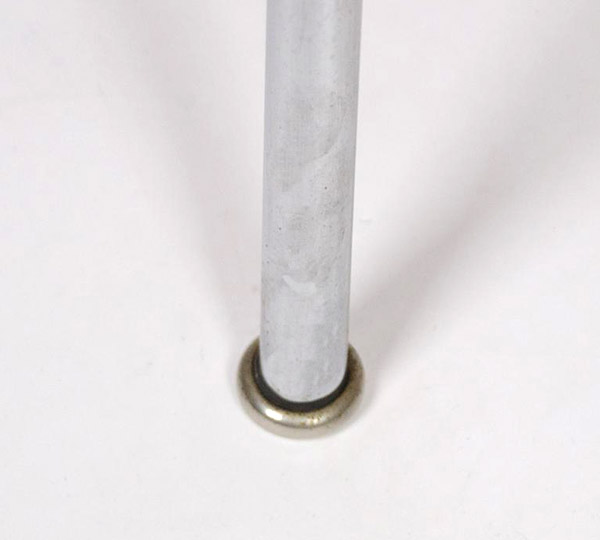 The 'domes of silence' feet of Evans original LCM chairs

Evans labels will include the medal label, the paper label and the more common foil label.

The early frames are predominantly zinc plated silver color with a lesser amount in black.

The shock mounts on the plywood series were thicker than those found on fiberglass chairs.

Often, the model abbreviation (LCM) was hand written onto the label or seat underside, presumably for assemly. 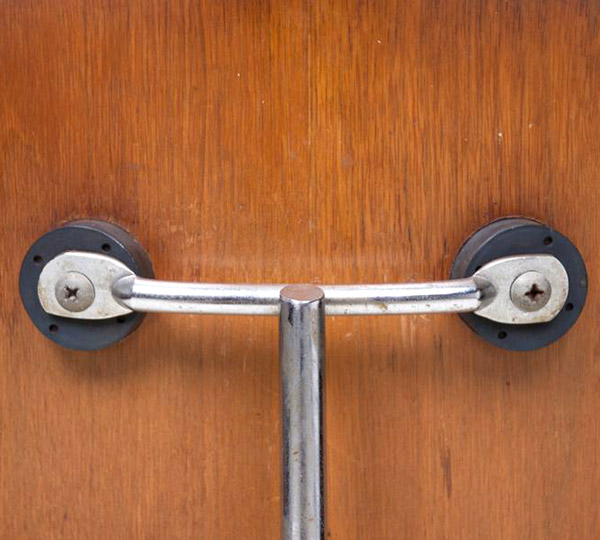 The second generation was Herman Miller's first manufacture of the chair and they changed some small details.

If you notice the connectors have changed from round to an oval shape instead.

The shock mounts remain the same size but have 4 noticeable holes punched into the outer surface.

The frame and feet however remain the same solid cast and domes of silence. 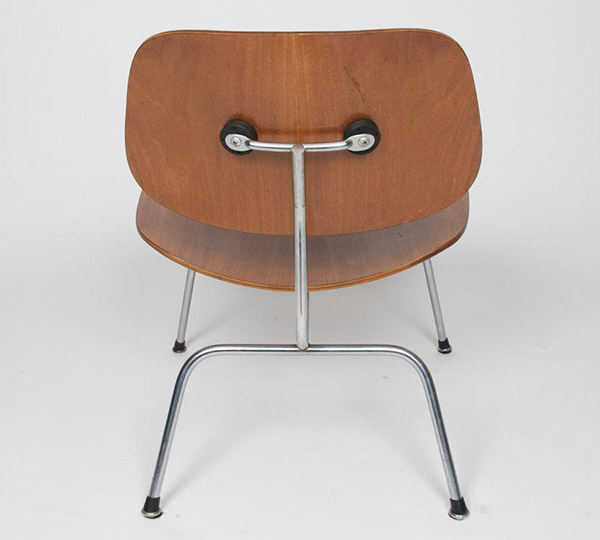 The third generation LCM had a change to rubber boot feet

The third generation, and second Herman Miller involved a change in feet.

The original domes of silence were replaced by rubber and alu boots which pushed onto the solid cast legs.

The change was initiated for ease and cost and because domes could break and prove tricky to replace.

All other aspects of the chair remained, the oval connectors, solid frame and mounts with holes. 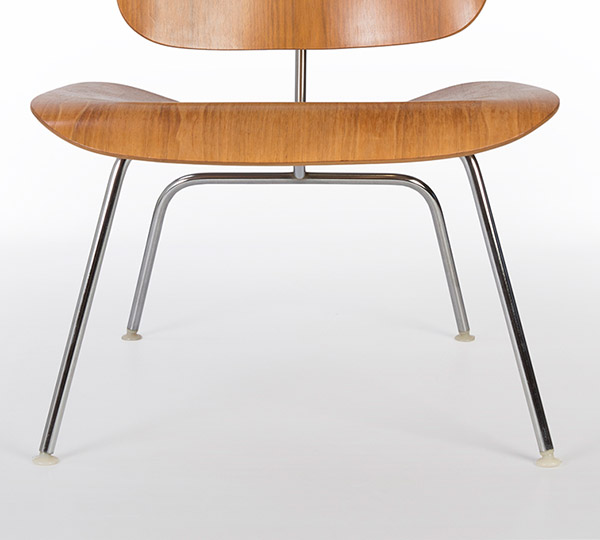 The 4th generation introduced a completely new frame for the chair and new feet once again.

The frame of the chair would no longer be cast and instead was tubular. This lightened the weight of the chair and allowed for better fitting feet.

New nylon glides were introduced. These were fully inserted into the tubular frame and are extremely difficult to remove. The feet contain a small ball bearing which allows the feet to pivot on the floor better.

The estimated years is from early 60's to late 80's 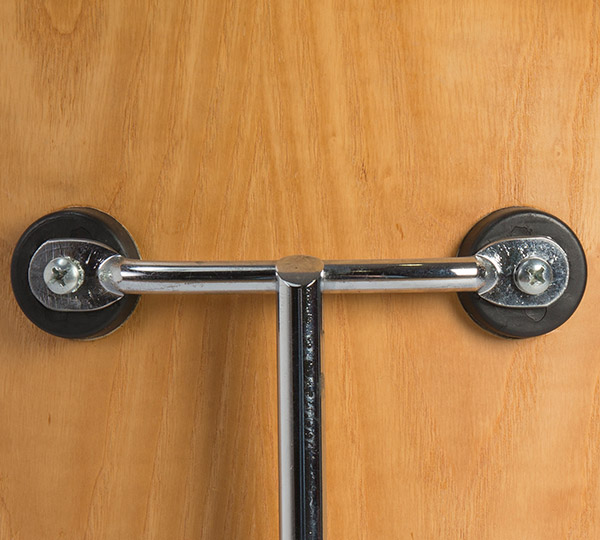 The fifth generation oversaw a reduction in the shock mount size.

The mounts were reduced to a thinner sizes similar to those found on shell chairs through the years.

All generations help to age the chair and this is one of the easier ones to see as well the labels.

Many of the reproduction copies use these later thinner mounts.

The estimated years is from early early 90's till late 00's 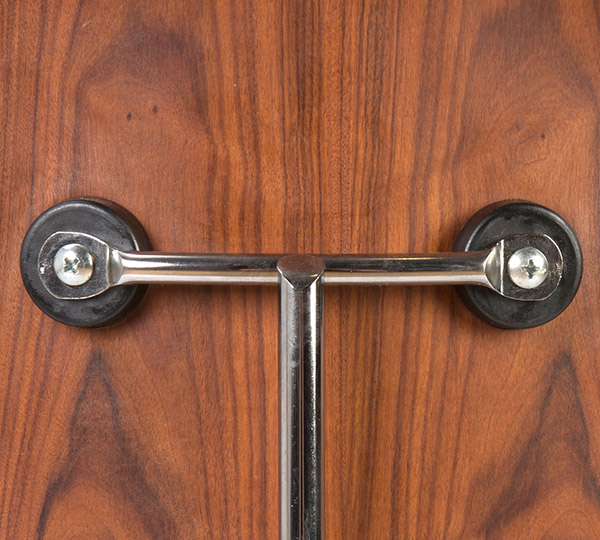 The 6th generation is the most current of the LCM chairs and see a change in the frame.

The oval connectors have been reduced in size and you can also see a steep 'cut in' to the oval connection instead of a rounded bar.

You are also more likely to find a full label on this generation as they are still relatively new and they are available in more wood types including Santos, a replacement for the original Rosewood.

The estimated years is from late 00's till current 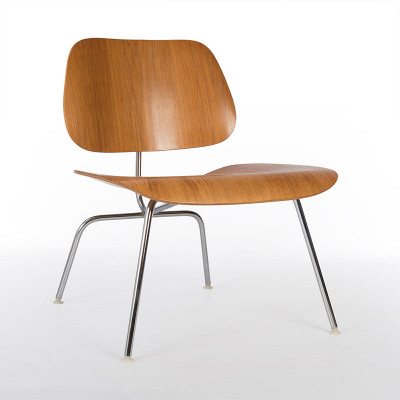 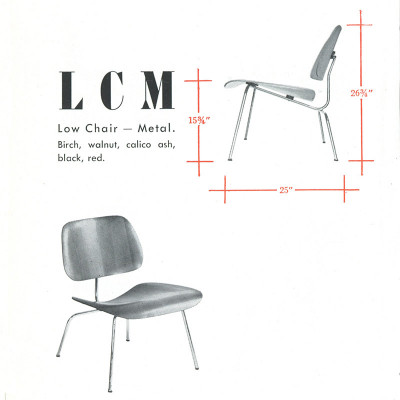 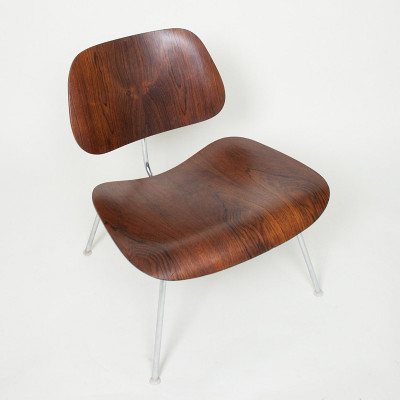 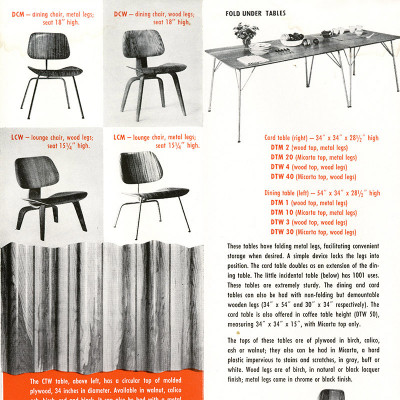 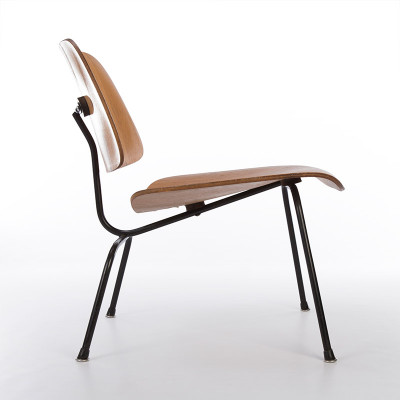 Side view of 3rd generation LCM with boot feet 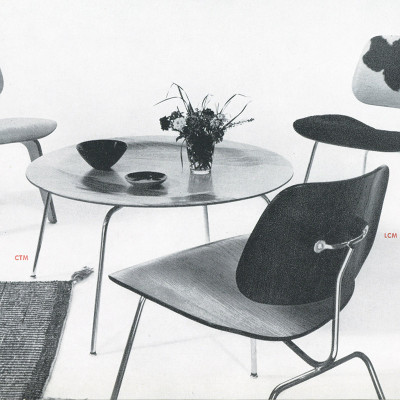 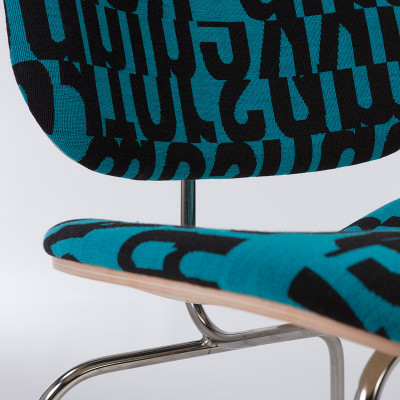 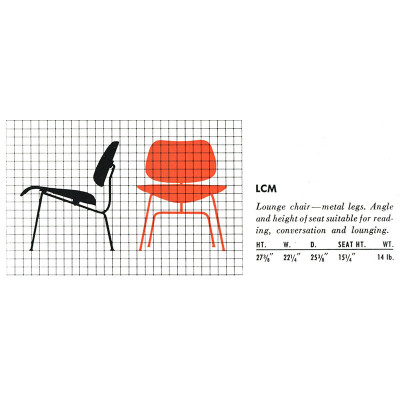 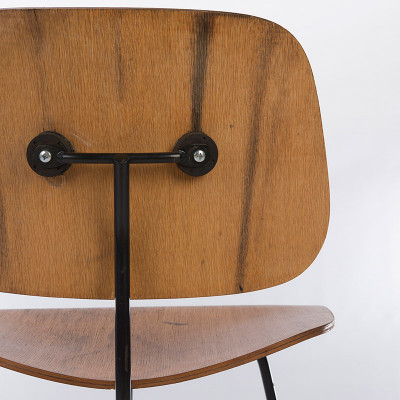 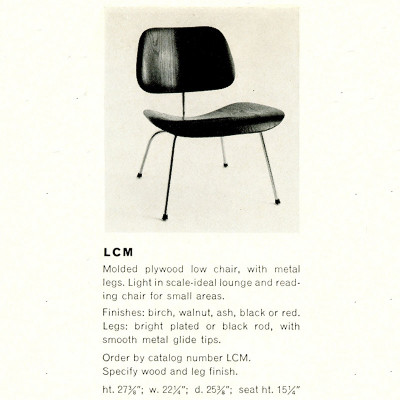 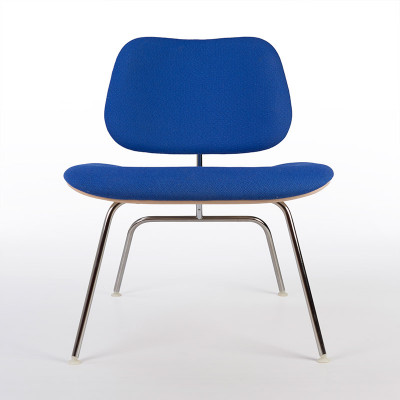 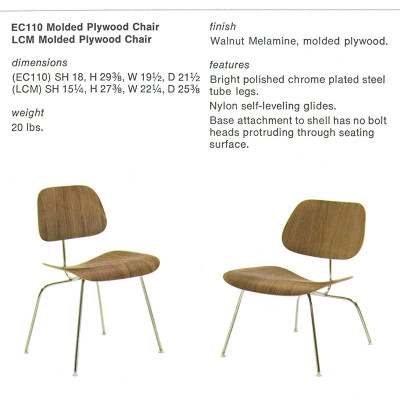