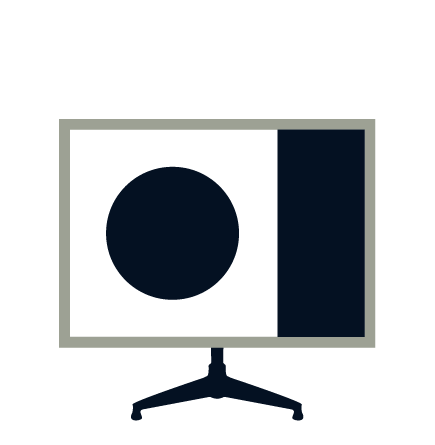 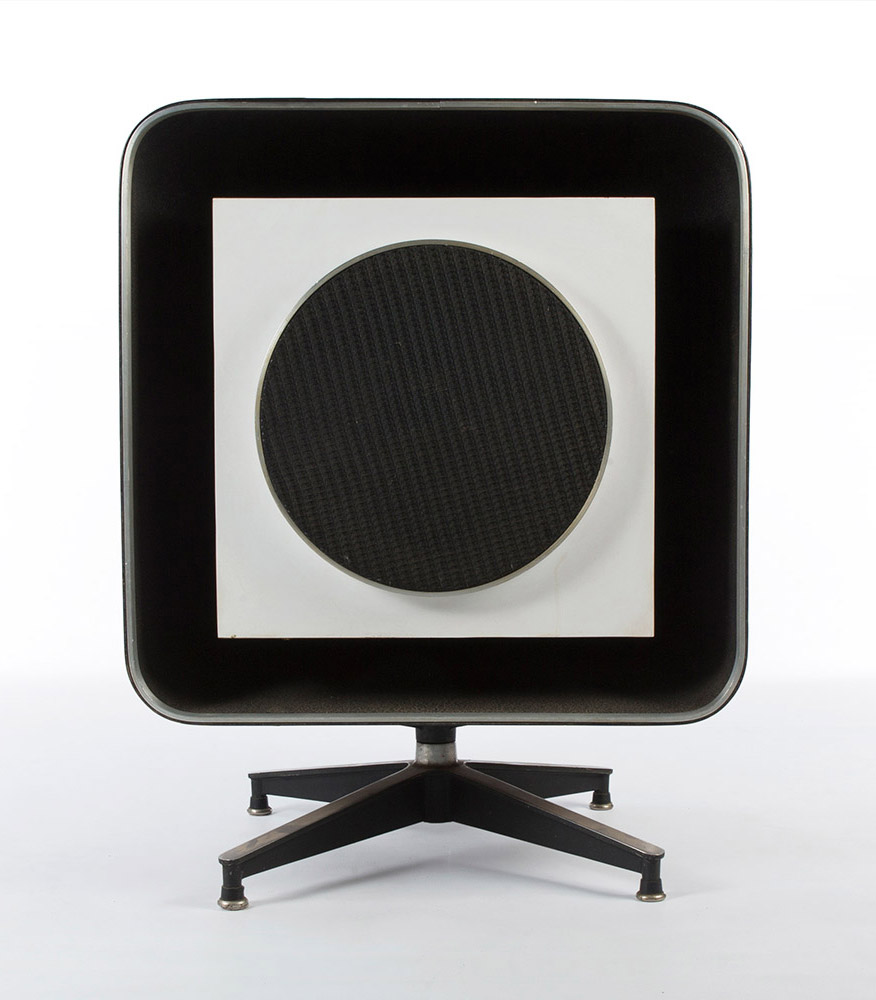 Designed and released in 1956, the Eames speaker range was a collaborative project between Charles Eames, the Eames Office and Stephens Tru-sonic, makers of quality high fidelity audio speaker systems.

The range consisted of specially designed cabinets, intended to provide both a high-quality sound as well as super impressive visual appearance. They were part of a re-branding exercise undertaken by the new owners of the Stephens company to display innovation within the Hi-fi industry. The Eames speakers would utilize the molded plywood techniques they had successfully developed in furniture and radio manufacture. You can also see influence from the Eames Lounge Chair, by way of the swivel base as well as the use of Micarta (seen on the DTM tables) and Saran cloth grilles (used with the first Alu Group chairs).

What is even more impressive about the speakers is the sheer level that the team pursued to get the best from the design. Not content with merely producing attractive cabinets, the Eames Office team worked tirelessly with Stephens engineers to understand the components of a speaker, how it works, how it transmits sound and how this can be done most effectively. The result is a truly wonderful collection of four models (known as E1 through to E4) each with various choices of options.

The most well-known of the speaker range was the model E4, a square design with large circular Saran grille and white square fascia. You might think it also contains a black outer face only to realize up close that in fact the dark area is space and that the internal square section appears to ‘float’ inside the outer casing. This high-quality speaker was given the name Quadreflex and was certainly the flag ship of the range, in sales, sound quality and visual appearance.

A piece of hi-fi history. This is an original Stephens ‘E4’ Quadreflex speaker designed by Eames and...

The Eames Office's collaboration with the Stephens Tru-sonic engineers would result in a collection of four distinct models that would eventually go to the marketplace. The project would see countless prototype designs and revisions before the final models were chosen and these were released sequentially over the course of around a year. The E-1, E-2 and E-4 had additional choice options including the choice of four legs or swivel base. The E-3 three way speaker design was available only on the traditional four leg design.

The first designs to be released to the marketplace were the E-1 and E-2 speaker models. The two were essentially the same thing, with the only distinction being that the E-1 models were white faced and the E-2 ones being black. Each model then had the choice of being available on either a swivel or four leg base. Models and specifications were as follows:

The dimensions of the E-1 and E-2 models were:

The units contained modified bass reflex enclosures and a 'two way' system speaker grouping for a well balanced sound. The two speakers contained within the unit were a 12" low frequency woofer and a 2" voice coil. 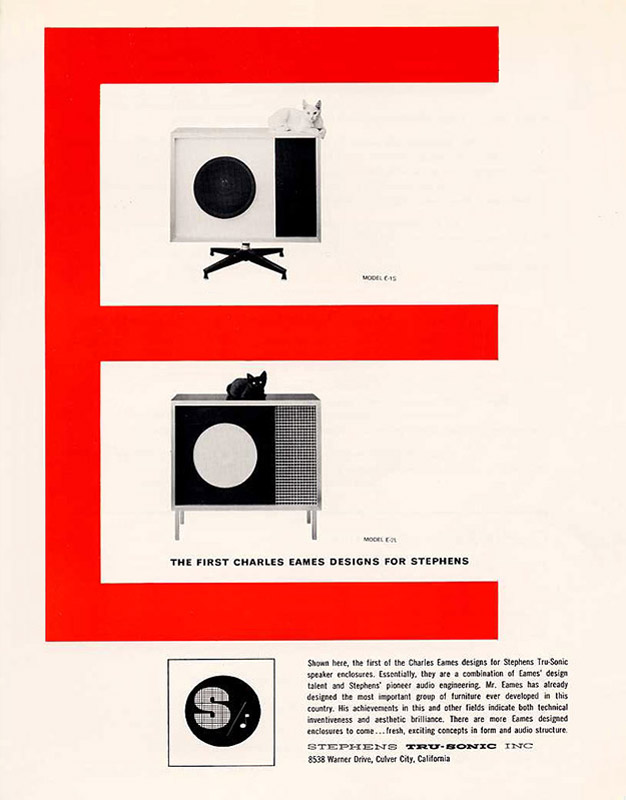 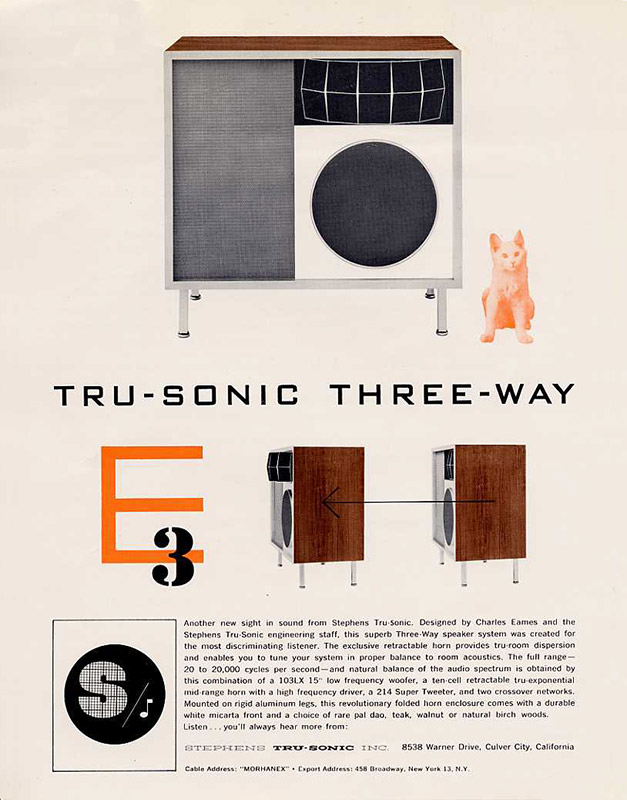 Hot on the heels of the E-1 and E-2 was a new design entitled the 'Three Way Speaker' and so naturally adopted the model number E-3. The design aspired to disperse the sound around to different parts of the room, if you like - an early version of surround sound. It was able to achieve this by utilizing three separate speakers, aimed at different frequencies and directions. Stephens marketed the design as 'dispersion, as never before attained in a high fidelity enclosure'.

The E-3 Three Way speaker also had a very clever design of the top right speaker unit (the honeycomb section) which was fully retractable, enabling sound to pass in various directions. Unlike the other speaker designs, it was not made available on the swivel base and was the most expensive unit in the range with a starting price of $540.

E-3 - Wood casing available in a choice of Paldao, Rosewood, Walnut or natural Birch. Fasica avaialble in white Micarta with black Saran grille, standing atop a base of four legged Aluminium.

The dimensions of the E-3 Three Way speaker were:

The E-3 units contained a grouping of three speaker cones, a 15" low frequency bass woofer, a 214 'super tweeter' for brilliant highs and a 216 High frequency driver for all round tru-bodied mid range performance.

The Eames model E-4 Quadreflex speaker is by far the most well known of the Eames speakers due to its eye catching appearance. Sadly, sales figures do not exist but they would have almost certainly out sold other designs by quite some distance, given the numbers of each model that have appeared in auction and secondary markets. Some well known publications even wrongly stated that the E-4 was the only 'production model' of the Eames designed speakers, which was simply not correct, it just became the face of what we knew as an Eames Tru-sonic speaker.

Stephens announced that the E-4's revolutionary designed produced a tru-bass response, without distortion, previously of which would have required a casing four times greater. The models available were:

The dimensions of the E-4 Quadreflex were:

Originally intended to be also available in Naugahyde, this was dropped early in production in favor of the wood finish and the wood base of the E-4 has never actually been seen as yet in the secondary marketplace. 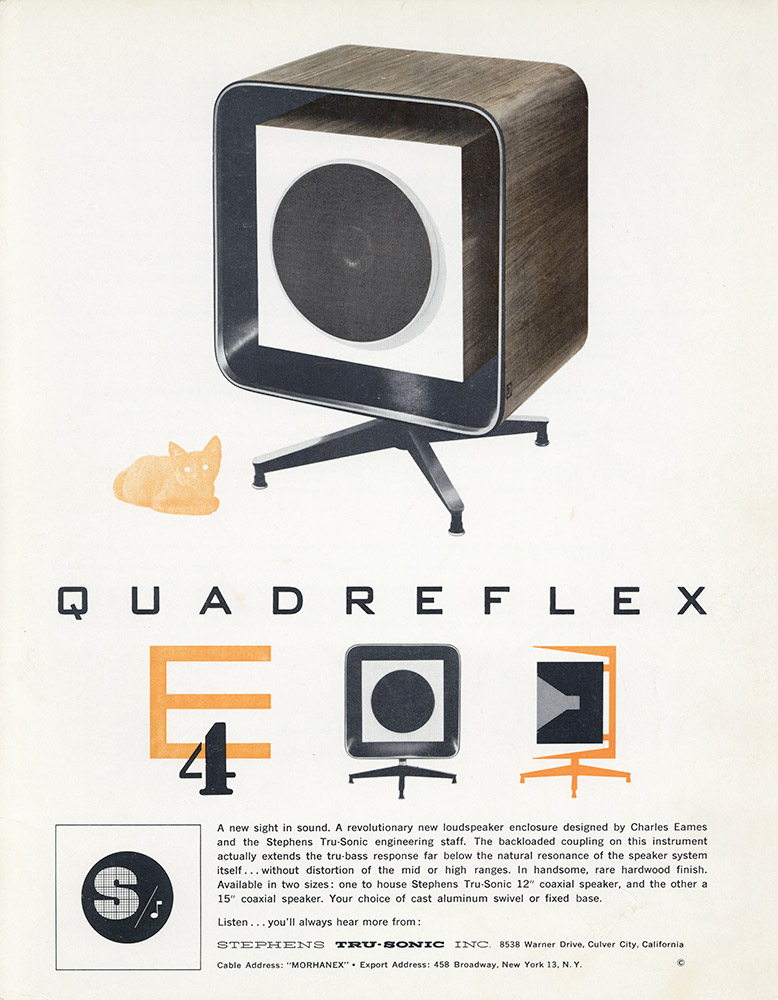 The original Stephens Tru-sonic brochure release for the E-4 Quadreflex Eames speaker, the last model in the range 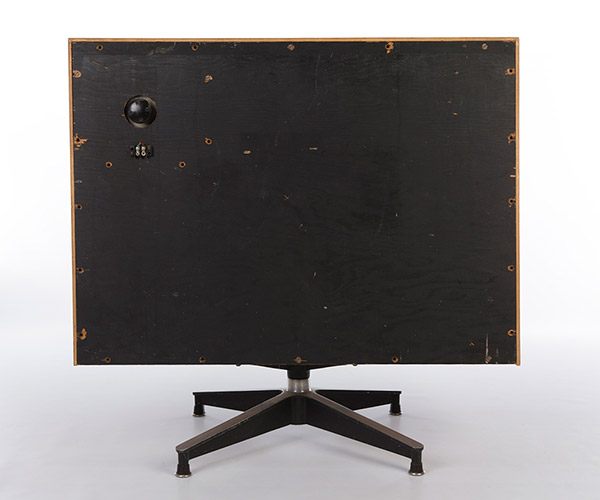 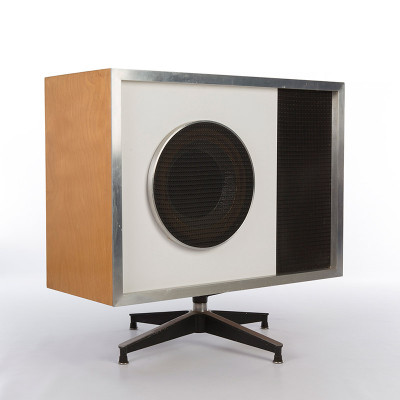 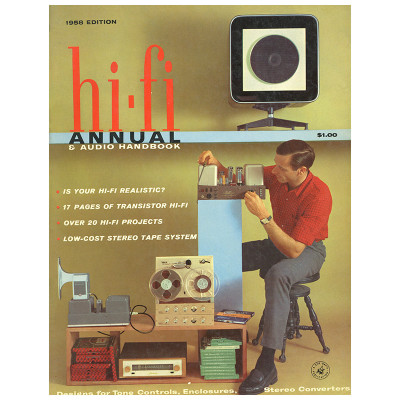 The Eames speakers were visually unusual, new and modern and were a popular choice for publications like this 1958 edition of hi-fi annual 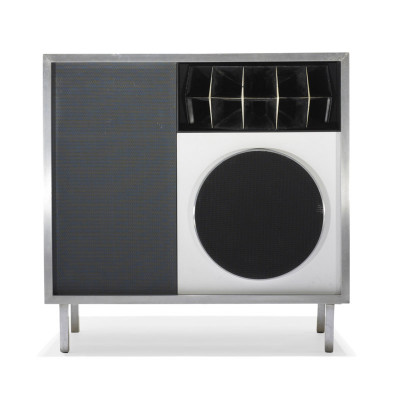 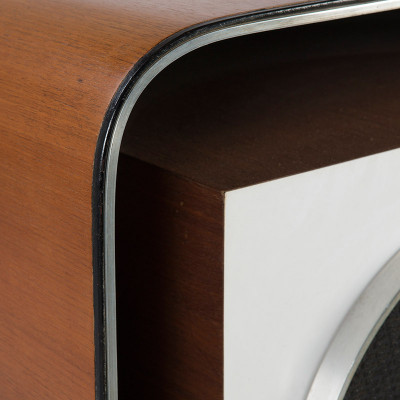 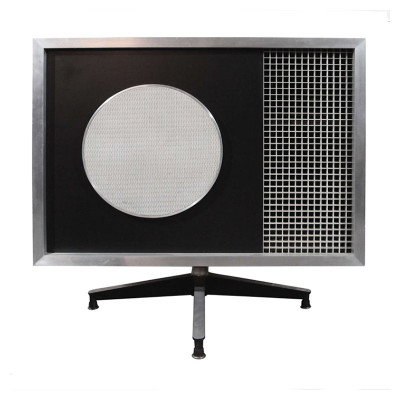 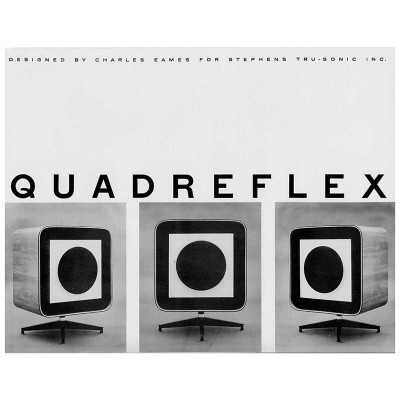 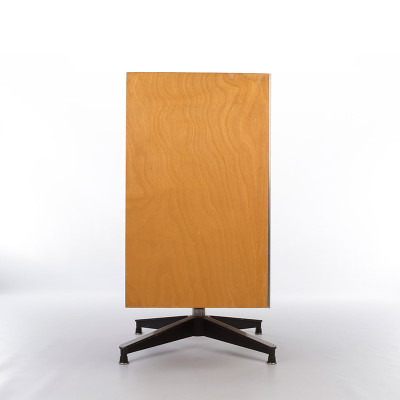 The side profile of the E-1S shows the depth of the plywood cabinet as being the same as the swivel foot base, taken from the Lounge Chair ottoman 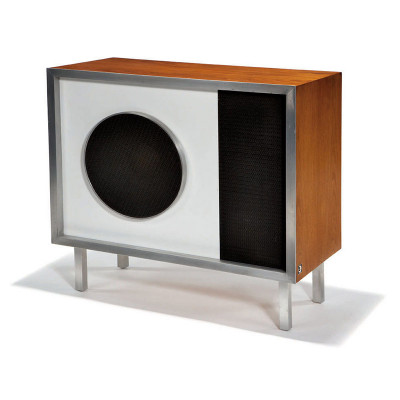 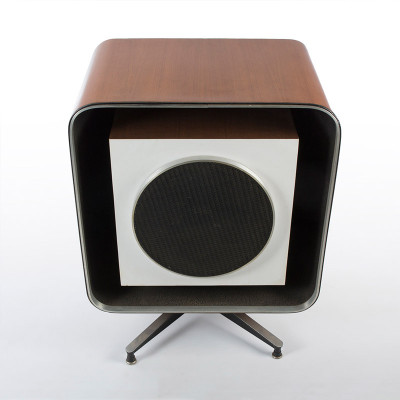 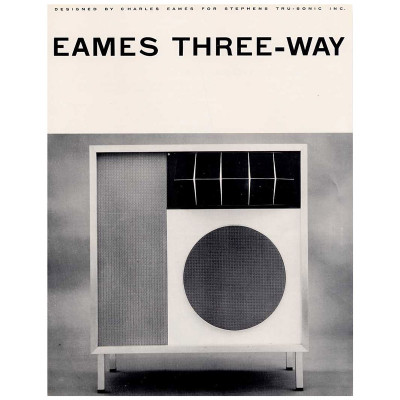 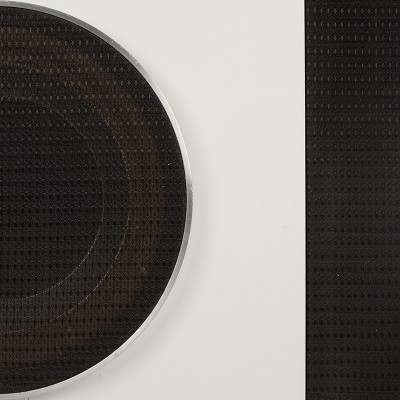 A close up of the white micarta and black Saran grille finish that adorned the E-1, E-3 and E-4 Eames speakers 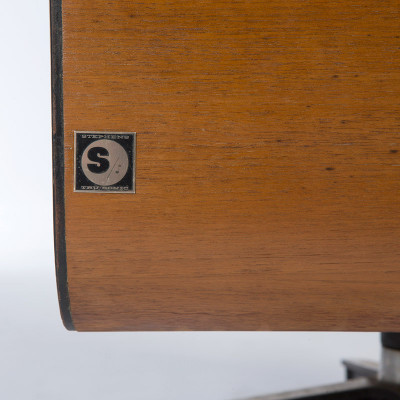