Side tables are underestimated and often overlooked, hidden underneath a pile of books or that favorite sprawling plant. Not big enough to be a coffee table and too small for anything significant, the side table sits patiently waiting for the time it is called into action. But remove them altogether and you begin to understand just how important they really were. They are finishers, the accessory at the end of the sofa to complete the look. They provide the means to put down your favorite drink, book or even that remote control, then they become the most important, indispensable.

Like all their designs, the Eames Side Tables were unique, unusual, inspiring and incredible all rolled into one. 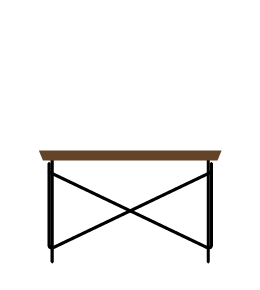 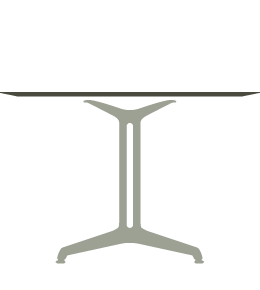 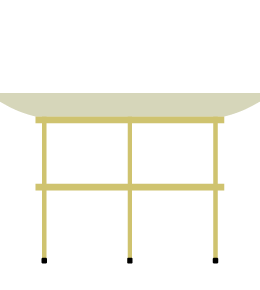 The most well-known Eames Side Table is undoubtedly the LTR, the abbreviated name for the Low Table with Rod Base. It was released in 1950 alongside a huge elliptical coffee table called the ETR and nicknamed the surfboard for its similar shape.  The clearest visual feature of both the LTR and ETR was that they were extremely low, measuring only ten inches high. This feature may have, for many, seemed to be impractical yet in practice they turned out to be the perfect little addition anywhere. The gorgeous top surface was available in many natural wood veneers over the years from Rosewood to Walnut and there have even been limited edition versions released with patterned Micarta tops too. Small in stature, the simplicity of the top and wire base combination is visually beautiful, and they can take the weight of a serious stack of books no problem! Inspired by the low and simple nature of a Japanese tea room, the LTR has always remained a favorite and has been in continuous production since its introduction.

Whilst the LTR may be the most well-known original Eames side table, it was not the first one. The IT ‘Drop Leg’ table wins that award with its release in the late 1940’s. It was released in conjunction with the DTM dining table and featured the same ingenious design of the legs folding up in sequence inside the top and therefore being perfect for storing. The IT in the model name stood for ‘Incidental Table’ and was small and square in shape and size. Like its big brother, the DTM, the tops were available in either natural veneer or colored Micarta, a plastic-coated surface designed to bring durable color instead of wood as an option.

In 1954 Waverly products released a series of trays and side tables adorned in the Sea Things pattern, designed by Ray Eames. The table was called the ‘Catch It All’ table due to its convex shape of the top which essentially allowed the user to throw/place any item with ease into it. This would be very handy for keys or a pair of gloves as an example. It must be pointed out that Charles and Ray Eames did not have any part of the design of the Catch It All table itself and the use of the Sea Things pattern was their contribution to it. The Waverly products featuring the Sea Things design were not in production for long and the Catch It All table is very rare to find today.

In the 1960’s came the La Fonda range of tables and chairs, released after the bespoke designs were made by commission for Alexander Girard’s restaurant in New York. Part of the range was a matching Eames side table with the same double stemmed distinctive polished base made just for the group. The tops were available in a range of beautiful onyx stone and marble as opposed to the plain wooden and plastic tops of similar series of Contract and Universal Tables.