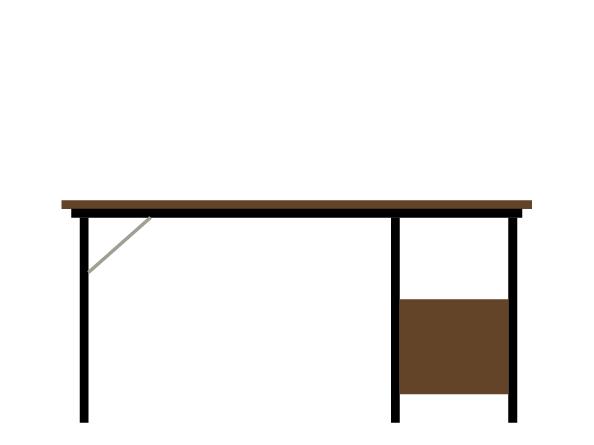 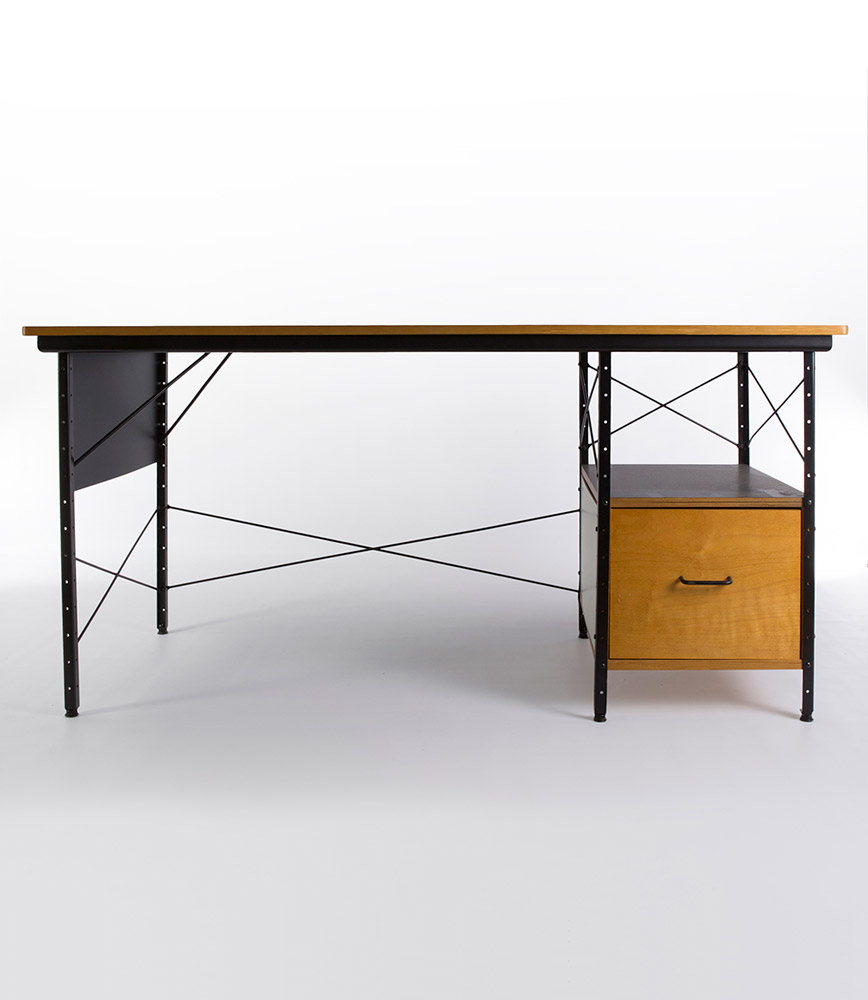 Released in 1950, the abbreviated EDU stood for the Eames (E) Desk (D) Unit (U) and was a small range of customizable desks, a continuation of the plywood series, designed for the post war home.

At first, the desks were actually named ESU desks, as they were part of the range of the sister plywood storage units of that name, but was later changed to avoid confusion. They were made from a fusion of interchangeable panel sections, metal frame and Birch or Walnut desk tops.

The focus of the design of the EDU (and ESU) series was primarily to provide affordable but quality furniture options of varying types to post second world war America. And in tandem with the storage units, the EDU desks were also entirely customizable and could be ordered with drawers or open shelving, in bright or neutral colors, with black or polished frame and (on later models) with an extension section.

The EDU desks were unusual in that the change from the first to the second generation, which occurred in late 1952, resulted in an almost entire change in the look and feel of the design, so much so it could be argued it was a different desk entirely. Most design improvements and 'generational' changes tend to be subtle, driven by feedback or the availability of parts but for the EDU it was substantial.

Both the EDU and ESU units sold relatively well during the production years and were a popular addition to the Eames designed portfolio. But changing requirements and Herman Miller's more 'commercial' focused desks from George Nelson would see the EDU discontinued in 1955. Nearly fifty years later and Herman Miller would revive the EDU for the 'home classics' market, re-making the desks from 2001.

Whilst at first it may be confusing in trying to decipher through the differing models of EDU desks, a few simple checks and you will begin to realize that they are actually quite easy to recognize. As the EDU has had three generations in its production lifetime, the best method to recognize any model and model number is to use the rules of thumb to follow in classifying the generation of the desk.

In brief, the EDU started life with two models, was simplified to one (with additional extension table) during the second generation and then back to the original two models in the third. The EDU was designed to be customizable however there was much less to change than the almost limitless choices on the sister ESU storage units.

Units were constructed of steel frames which were zinc plated in the 1st and 3rd generations and chrome plated in the second. All were available with a black painted frame in addition. Tops were available in Birch plywood veneer in all generations and in Walnut for the first two. The early original panels of the desk were constructed using fiberglass, changing to painted hardboard in the later third generation.

Each desk was available to buy as either a left or a right hand model and with either colored or neutral panels, denoted on the model number by the extension -C for color and -N for neutral.

The EDU was released with two distinctive models. The smaller D-10 series and the larger D-20 series, each with the option of left or right hand models and both in either colored or neutral panels.

The D-10 was the smallest desk size, was marketed as a 'home desk', and is recognizable by the open storage bays (no drawers) which could be configured to be accessed from either the front or the side.

The second desk of the first generation was the D-20, a larger and more functional design with built in drawers which could be placed on the left or the right side. Note too that the drawers and shelving section is also wider and the top had an additional 16" (40.64 cm) in width. Being customizable, sometimes the drawers are found in the top section or even with two lots of drawers (6 in total) filling the shelving spaces. Generally though the desks were sold with the drawers placed lower and the panels in the same neutral or colored choices.

In late 1952 both the ESU and EDU units went through something of a revolution. The straight 'Meccano' like frames/legs were the main issue as they would buckle and bend, both in transport and if the piece was being moved by the customer while fully laden. There was also a change of focus at Herman Miller, with the idea of creating designs more worthy of the title 'work' desks as opposed to those meant for lighter home use.

The end result of the evolution meant that the EDU was pretty much unrecognizable from its predecessor. Firstly the open storage areas of the D-10 and 3 drawer units of the D-20 were discontinued in favor of a larger 2 drawer 'file' unit which sported black fascias and a rounded pull handle. The distinctive steel cross strut supports were also replaced by a chrome plated frame with a horizontal foot rest built in.

The D-10 was discontinued entirely and only the larger desk type was produced under the D-20 model number. A new additional 'typewriter' extension table was added to the range in an attempt to cater for the commercial market and this new model was given the D-30 code.

The units remained available in both colored and neutral panel choices as well as left and right handed sides.

The original EDU and ESU units were discontinued after the second generation in 1955 as Herman Miller moved away from plywood and concentrated efforts into George Nelson's workplace furniture ranges that were more geared for the commercial marketplace.

It would take nearly 50 years for Herman Miller to bring the series back to the marketplace, with the ESU storage units re-introduced in 1998 and the desks later on, around 2001. The re-introduction of the Eames 'home classics' would see the EDU desk be made to its original specifications, a mirror of the first generation, with the D-10 and D-20 models made. The original fiberglass colored or neutral panels were replaced with painted hardboard and Walnut was no longer a top choice leaving Birch as the sole option.

One variation to the original design was the single 'file' size drawer replacing the three drawers on the larger D-20 unit and an additional code (D-21) for the left handed unit. 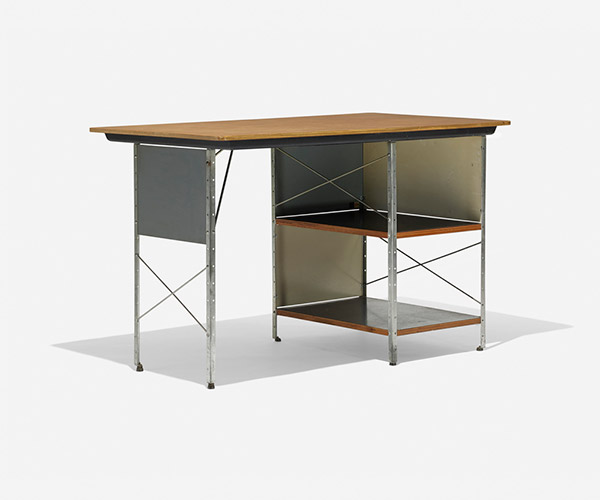 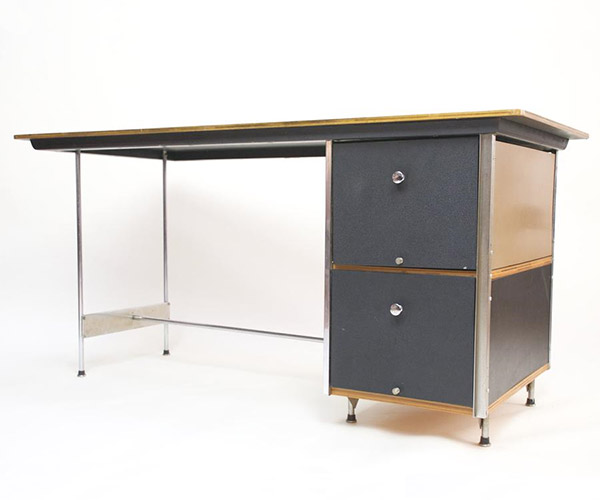 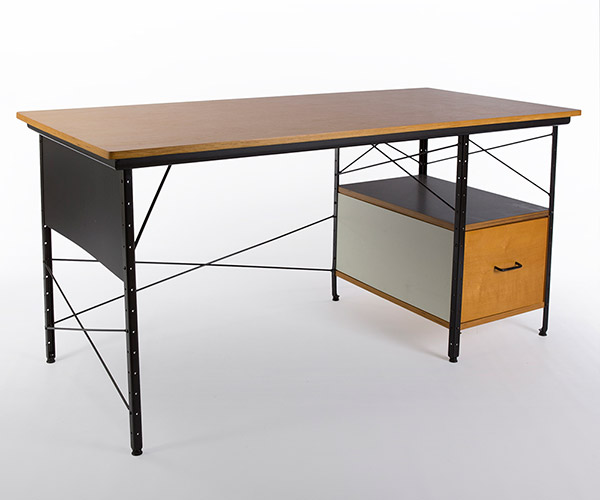 A later third generation D-20-N, most easily recognized by the single file draw which replaced the 3 drawers of the early generations 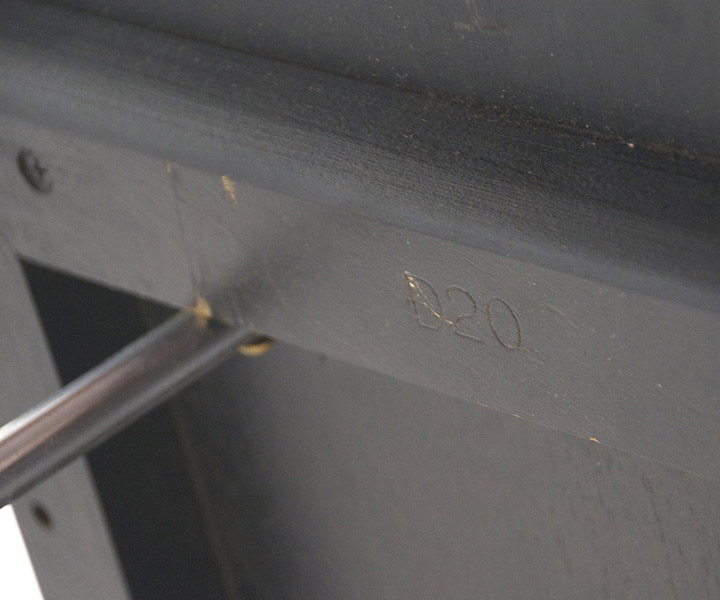 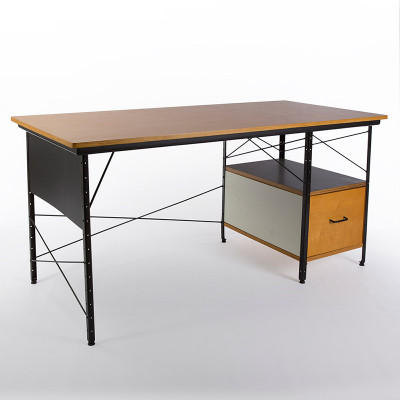 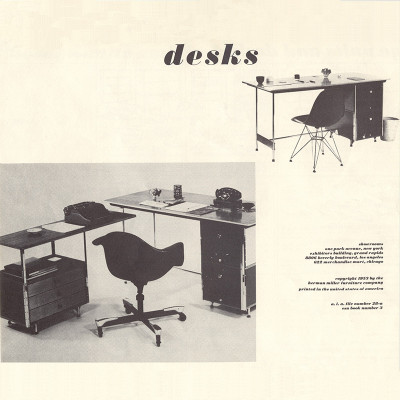 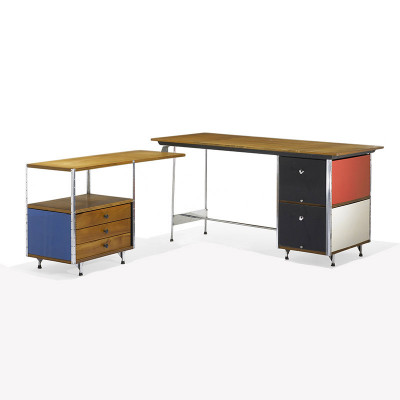 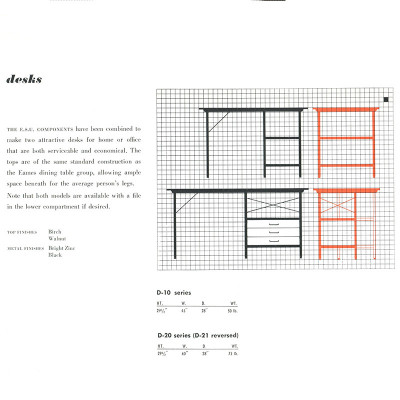 1952 Herman Miller brochure EDU specification page with mistake in the depth of the D-10. 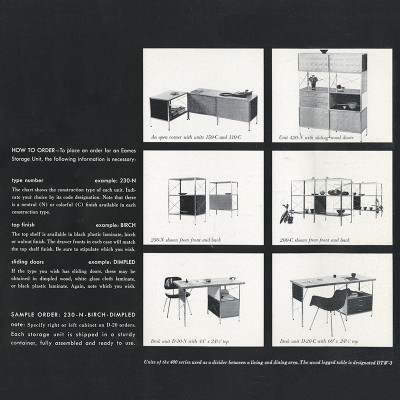 1950 Herman Miller release brochure for the ESU/EDU series depicting the available desk models at the bottom of the page. 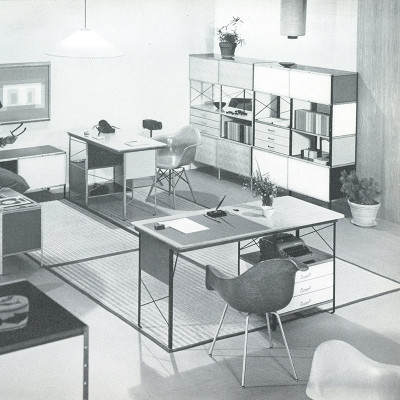 Early 1952 Herman Miller catalog image depicting the plywood ESU/EDU series with D-10 at the rear and D-20 in the foreground. 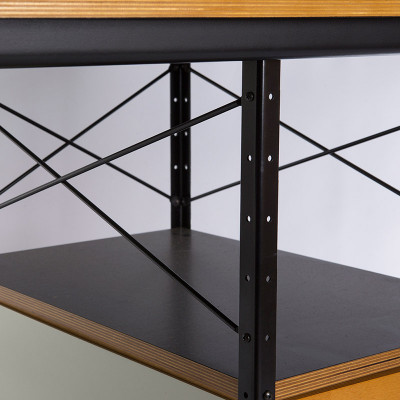 Close up view of the open shelving, black frame and cross struts of a later 3rd generation D-20 unit. 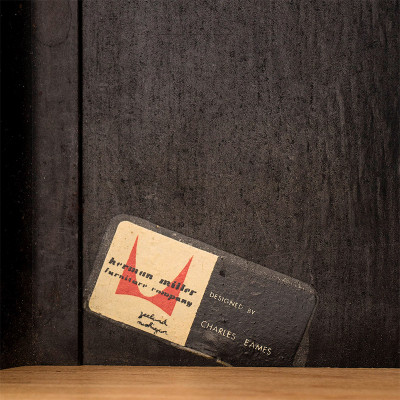 The Herman MIller 'half label' found on the early vintage EDU and ESU units.