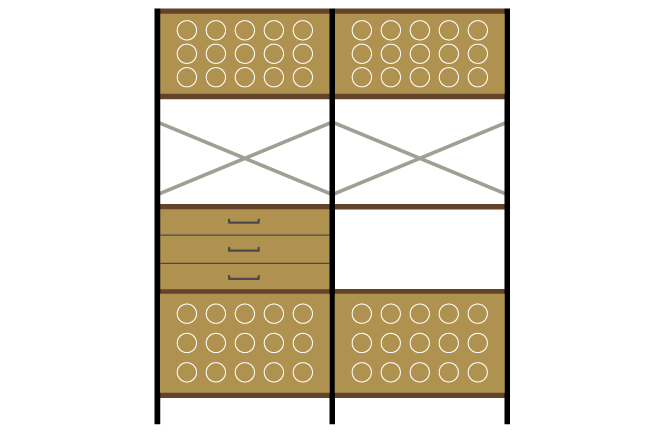 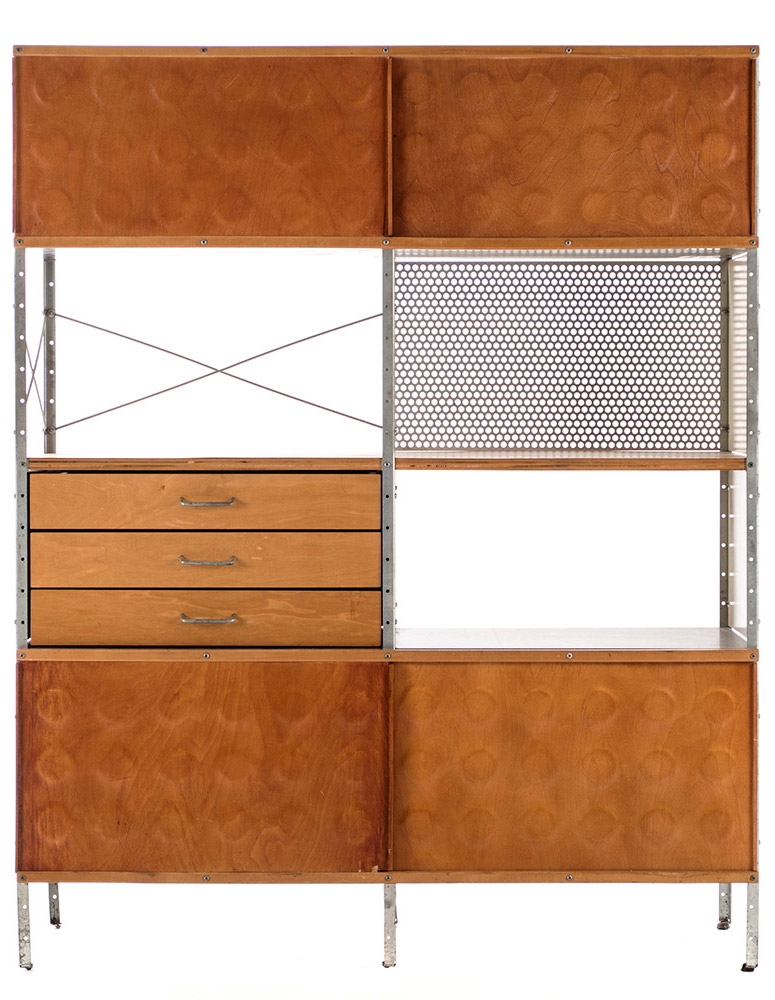 Released to the market in 1950, ESU was the simplified abbreviated name for the Eames (E) Storage (S) Units (U), a range of lightweight versatile storage solutions with three available heights, two widths and countless customization options.

The units were released alongside the matching EDU desk and were very much part of the drive at the time for low cost furniture that could be put to practical use in numerous ways. The units were made to standardized sizes and the available options not only meant versatility in the look and feel of the unit but also for what it could be used. The Eames ESU was an excellent choice for both domestic and commercial customers.

The units were customizable to the extent that each section could be open fronted (or backed) with wire cross struts, draws, sliders or panels in laminated (bright or neutral) colors or natural plywood finish. The Units were coded by way of their height with the 100 series one level high, 200 (two levels high) and 400 (four levels high). There was no 300 series.

Lots of modern biographies have described the Eames ESU as possibly having Japanese influences in its visual and industrial design (which would certainly have been bold for the post war US). There are other theories, one being that it resembles Meccano, invented in 1898 by toy train maker Hornby, likely due to the metal frames and the fact that the buyer had to construct the units in early market examples. Another is that the design influence may well have come from the artwork of Mondrian, the Dutch artist famed for abstract art of square and rectangular pattern using black lines and red, yellow and blue panels in between.

The units were by no means a commercial failure but the changing requirements of Herman Miller's move away from the plywood furniture, meant they were discontinued in 1955. The re-rejuvenation of the Eames Classics would see the ESU units be re-introduced (in some models) in 1998 after a 43 year break.

The Eames ESU was a series of fully modular units that could be entirely customized by the end user. The series was made available in three heights with their model numbers entirely dictated by the number of vertical 'levels' which that particular unit contained.

Simply put, the 100 series was one level high, 200 series was two levels high and the 400 series was four levels high, all with two units across in width. The 100 and 200 series also featured a half width unit which proved especially useful for freestanding drawer units and side storage tables.

All units were released with two choice options of panel set tones. These were indicated by the extension code on the model of either -C for 'color' panels or -N for 'Neutral' or 'Natural' panel sets. This clever idea enabled the buyer to be able to fully dictate the color scheme of their units, from a traditional natural plywood look to the razzmatazz of one displaying a multitude of color. In 1952 a -K option was also made available which stood for Checkerboard, a mixture of black and white panels.

All models were made using:

The 100 series was the baby of the group. They were low level units designed to offer subtle storage solutions without the need for a big space.  Three 'off the shelf' models were made available which included an open fronted (100) and fully closed unit with sliding doors (110). A half width open unit (150) was the third model and both available with color or neutral tone.

Note the brochure page of the 100 series suggests that the units were perfect for storing 12" vinyl LP albums, proving themselves to be entirely current with the changing times of the early 1950's when music played such a pivotal role in society.

The measurements of the 100 series were as follows:

The 200 series offered the greatest versatility of the range and the most 'off the shelf' models for purchase. Not only were the two level 200 series a useful size for optimal storage, but they were also marketed as possible room dividers as well as side units. The look and feel of the units could be entirely changed through the interchangeable available options.

Being entirely customizable, many other variants of the 200 series cabinets have been seen in the secondary market, including ones with double sets of drawers.

The sheer number of possibilities for the 200 series cabinets means an array of different setups are found in the secondary market. This catalog page showed some of the 200 series units available.

The measurements of the 200 series were as follows:

The famous 'dimple' design of the sliding doors was available with the 230 and 240 models. The 200 series half width units (250-270) were ideal as side tables and drawers

The 400 series Eames ESU units are the grand daddy of the range, the largest and undoubtedly most recognizable and famous. The 400 series offered a complete solution with some eight separate modular units which could be open storage shelving, closed sliding door space or internal drawer units.

The drawers unit of the 400 series was always (unless specifically customized otherwise) found on the left hand side and second unit up. The adjacent unit was almost always left for open shelving as well as the two directly above. The difference in the models only tends to be whether the top open shelving units have cross rod or back panels on the rear.

The measurements of the 400 series were as follows:

The tallest of the Eames ESU units, the 400 series, were generally found with one set of 3 drawers on the left hand section however they were also available with purely sliding doors too

Generations were often never intended but usually came about as the result of refinement, improvement, changes in available materials and components or from feedback from customer experiences.

This was certainly the case with the Eames ESU units as the minor detail changes were very much aimed at improvement based on the feedback from customers. 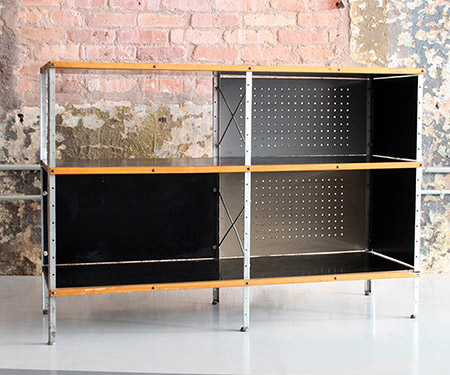 The first generation of ESU units are initially identified by the legs of the sides and center (on full width units) support angles, the Meccano like metal frame that holds the whole thing together. The angles 'ran through' from the bottom shelving unit to create the 6 (or 4 on half width) standing legs.

In order to differentiate from the 3rd generation, the original label and age old patina of a unit dating to the 1950's should be observed. 1st generation unit drawers had 'U' handles always. 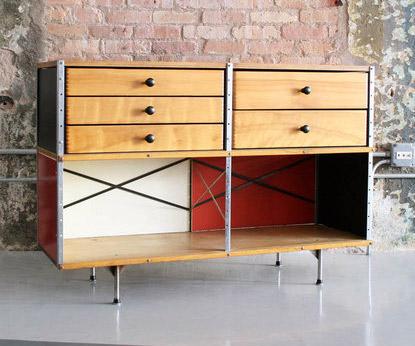 The design was changed in 1952 after feedback observed that the legs could easily bend, both in shipping and moving of the furniture units. In order to combat this, legs were changed from the 'straight through' type to that of 'off-set' legs which would have an additional triangular section to add support. Legs were also reduced from 6 to 4 on the full width units.

The drawer handles during this period were also changed from the original U-handle to rounder knobs. 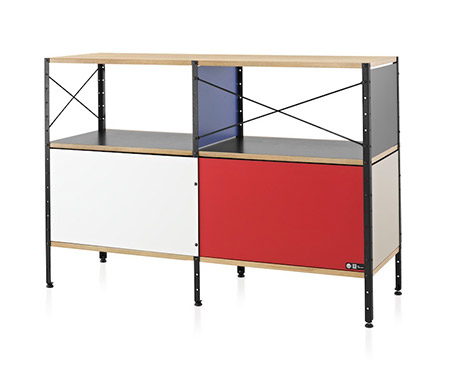 The third generation is that of the re-release of the ESU range by Herman Miller since 1998. The units have reverted back to the original specifications of the first generation by utilizing the straight through legs and U handle fitments. The issue of the bending and buckling of legs still remains in theory however the metal struts have been strengthened somewhat.

It shouldn't be possible to confuse this with the 1st generation due to lack of ageing, modern panels and modern labels. 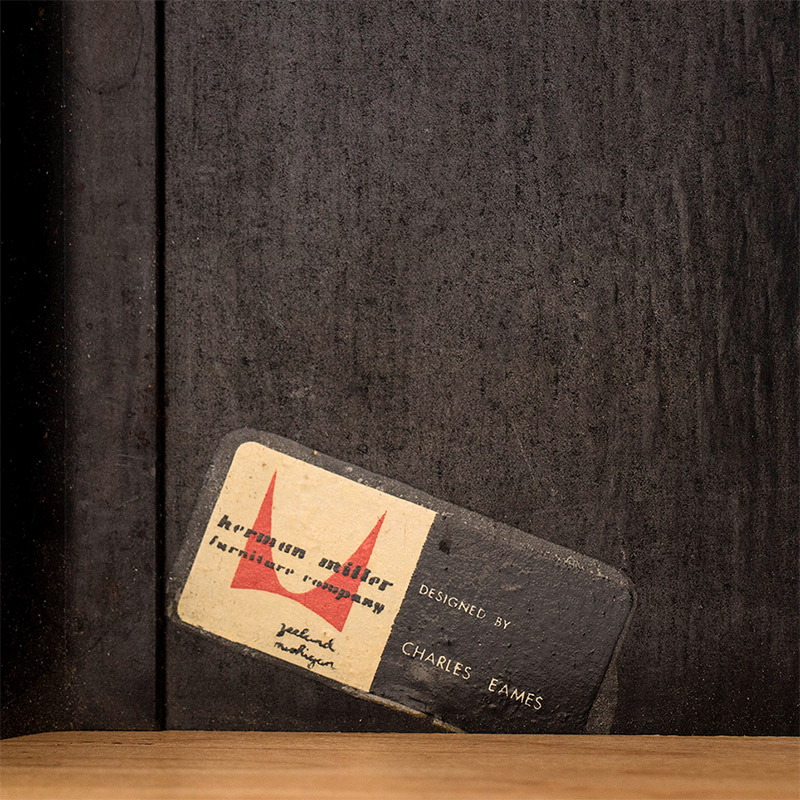 An early 'half checkerboard label' typically found on vintage Eames ESU units. The foil strip label was another commonly found. 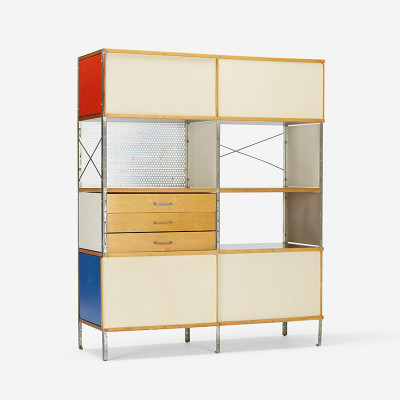 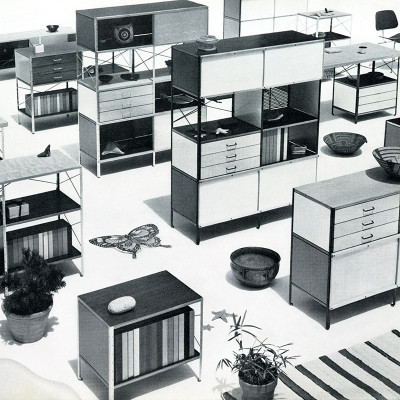 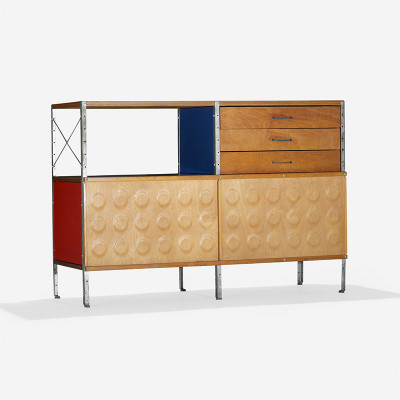 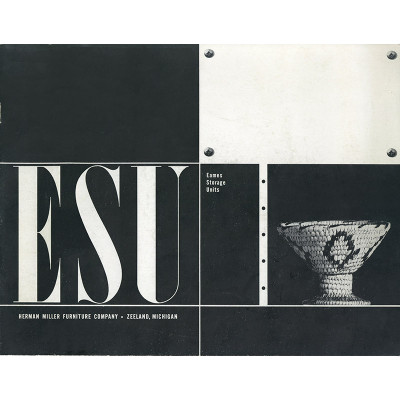 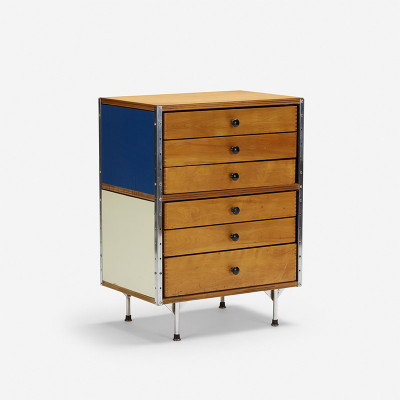 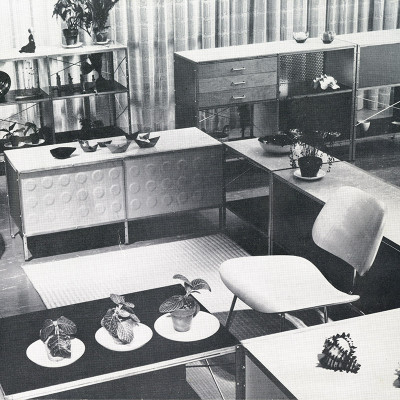 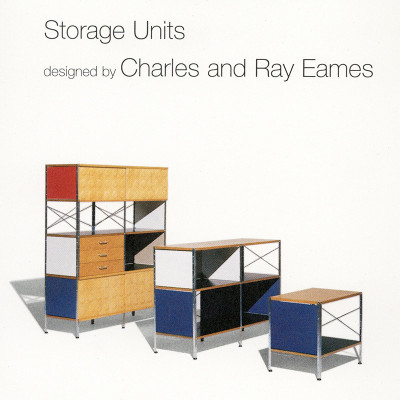 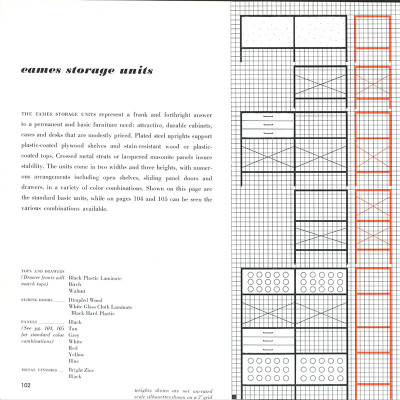 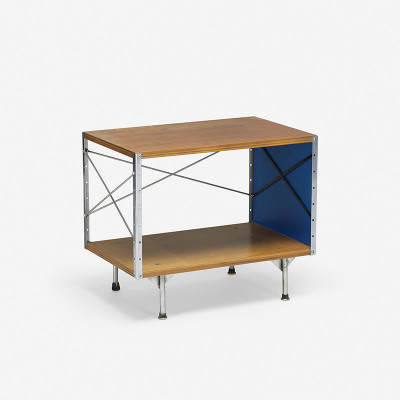 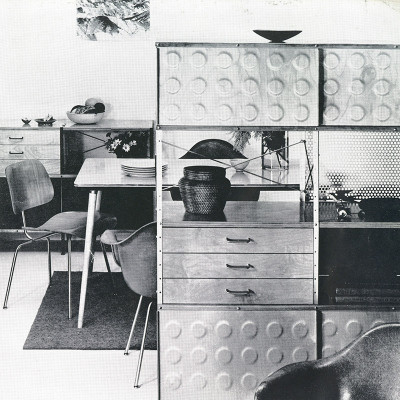