An evolution of the 'Eames' House Bird 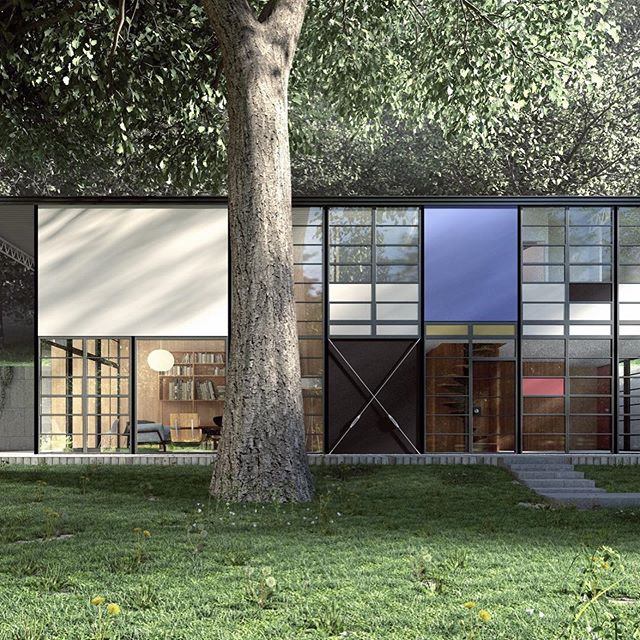 Main building of Case Study House no. 8, the Eames House showing living area to the left

Nestled into the hills of the Pacific Palisades neighborhood of LA, with a perimeter view of Santa Monica and the ocean beyond, stands Case Study House no. 8, more affectionately known as 'The Eames House'.

One of 26 'Case Study Houses' that became finished homes, the program was designed to fuse new and progressive architecture with real need for inexpensive housing in the post war USA. The construction was essentially two separate boxes, made from a combination of steel frame, glass, panels and a concrete base. Some remark on the visual design of the building as having influences from the works of Mondrian, the 20th century Dutch artist with the distinctive style. Others are quick to point out the similarity of the design to that of the ESU, the storage range that housed customized colored panels, cross struts and a frame of steel.

The two structures consisted of living quarters and a working studio, a remarkably insightful feature that encouraged the separation of one from one's work yet enabled it to be close enough as to never stem the tide of inspiration, whenever it may occur. Whilst we may never know the full extent of the work produced at the house studio, as opposed to the nearby Venice site of the original Eames Office, it is safe to say that a good degree of Charles and Ray Eames legacy was undoubtedly produced there.

Designed with the help of close friend and acquaintance Eero Saarinen as early as 1945/1946, Case Study House no. 8 would take longer than planned for its construction, finally being ready for dwelling in late 1949.

It is one thing to create a house so unique, so minimalist, but it is certainly another task to turn that house into a home. What matters most is never the material, but the very souls of those whom reside in it, the people. The bits and pieces that they collect, create, or change over time, are not just objects or indeed visual clues of wealth, but the legacy and reflection of those that wanted to be surrounded by them.

Visitors to the Eames House, commonly on a beautiful Southern California day, are greeted first by the structure itself, a house design so different huddled between the trees and the green of the gardens. Then they may pick out the famous furniture designs we all know and love, like the Eames Lounge Chair, or maybe the wooden DCM or stacking side chair. But it is only when they begin to look more closely that they start to see the real treasures of Charles and Ray Eames. It is then that their eyes wander through the myriad of eclectic 'things' both small and large, objects of pure art and joy, emanating from the five continents of the world.

The Eames House is awash with objects from far flung travels, gifts from long lost friends and from nature too. Each of them is unique, each of them handmade and each tells a story, and this is what makes them special. From carved whales and shells from the sea, to vases, pots, figurines of ceramic and wood. To artwork, ceiling hangings, textiles and curios, from solid wood carvings to tumbleweed. The objects of Charles and Ray are visible for all to see, are numerous and capture the very essence of whom they were, not as the legendary designing duo, but as two people sharing a home. 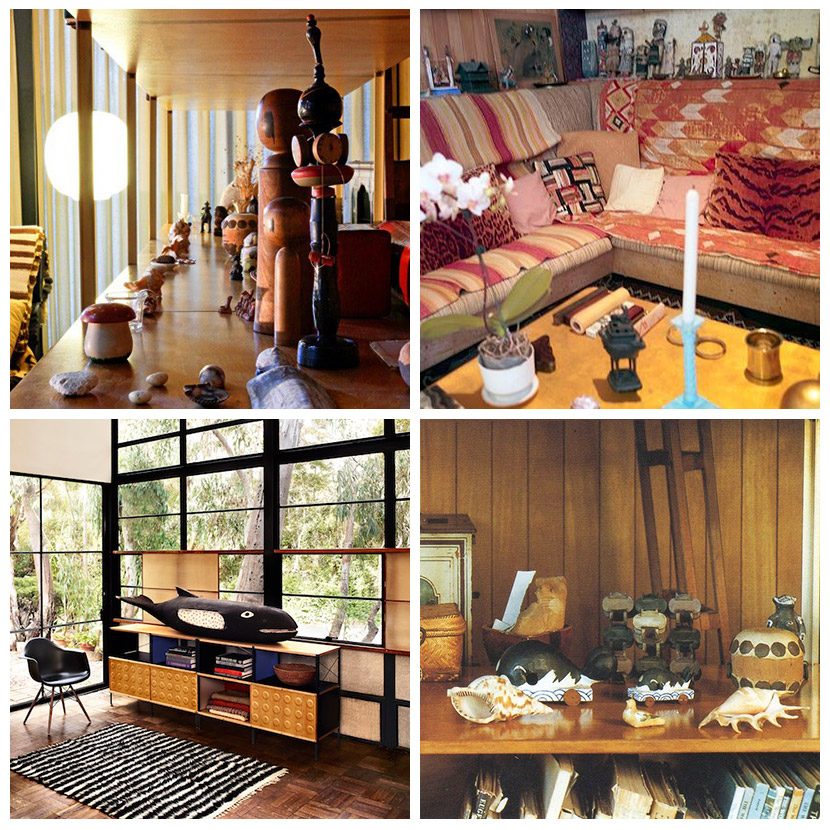 There is one eames 'thing' that doesn't stand with the rest, but rather proudly waits, inconspicuously sitting atop a beautiful vintage textile rug. Separated from the rest, yet positioned in the very center of things, one can only assume that this is something of great importance to its owner. This dark, painted wooden object stands and displays its body, lightly worn with the passing of the decades, in such a manner that it is integral to the living space, a small but prominent feature. This 'thing' is of course what is affectionately known today as the Eames House Bird.

Visitors lucky enough to visit the Eames House, which today serves as a 'time stood still' museum, will hear the curated origins of this treasured blackbird. The Eames purportedly acquired the object while travelling and enjoying the Appalachian Mountains, a range that spans a host of states in the Eastern US including both Virginia's, Carolina's and Tennessee among others. It is described as 'folk art', a handicraft hand carved from a single piece of wood. It is certainly more than an ornament, it is a wonderfully curved sculptural artwork, brought to life as a blackbird through the intelligent addition of two small steel legs and beads for eyes. 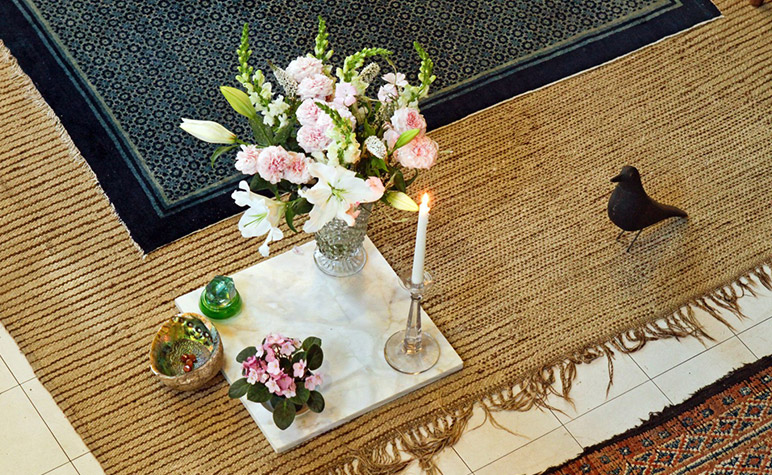 The Eames House Bird sits on the rug, in the center of the main living space, a central focal point for all to see 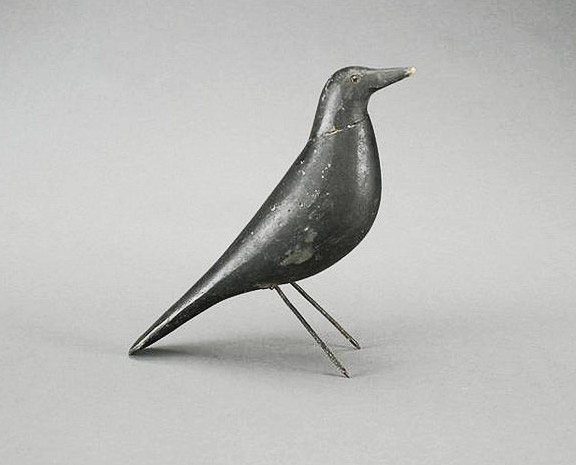 ...this fabled story certainly has a sense of adventure, a sense of mystery too but could it be that its origins have more explainable beginnings?

Let's turn our attention to the work of Charles Perdew (1874 to 1963) we can perhaps begin to understand one of the plausible alternative theories to the origin of the Eames House Bird. Perdew was born and lived in Henry, Illinois and together with his wife Edna, would become very well known for his (often intricate) carvings of birds, especially wild ducks. These would be both ornamental and for decoy, to be used for hunters to attract other birds. One of the series Charles and Edna produced were ‘crow decoys’, black birds with wire legs, to be deployed in agricultural fields to ward off hungry invaders. Though most tend to be in two pieces (with removable heads) one may see the striking resemblance between Perdew’s work and our Eames House Bird.

Perdew was not the only one making bird decoys either, though his work has become synonymous with the craft. The Eames bird may still have been acquired in the Appalachian Mountains but there is also as good a chance it came from Illinois too.

The House Bird, whether it be folk handicraft or crow decoy is a visual wonder and clearly something that captured the eye and imagination of Charles Eames. Perhaps it was the organic form, the simplicity of the idea, the quality of the craftsmanship, or possibly a combination of all three. If its pivotal position in the Eames House wasn't enough to showcase this admiration, Charles would utilize the bird as a prop, blending the wonderfully curved outline into artistic catalog photographs and brochures. This is no small thing, Charles clearly felt that its inclusion was merited, perhaps because the quality of the work, the idea or the artwork the object possessed was equal, worthy of a place alongside his own.

We will never likely know the reason Charles and Ray Eames coveted their bird so much. We could speculate a number of theories such as its visual appeal, perhaps it was handmade while being observed or perhaps it was so special because it came alongside a memory, a treasured moment spent with loved ones, on carefree travels. Whichever theory may hold the truth is likely lost to the annals of time, but it endures and is loved by all whom set eyes upon it, a true treasure of the Eames House. 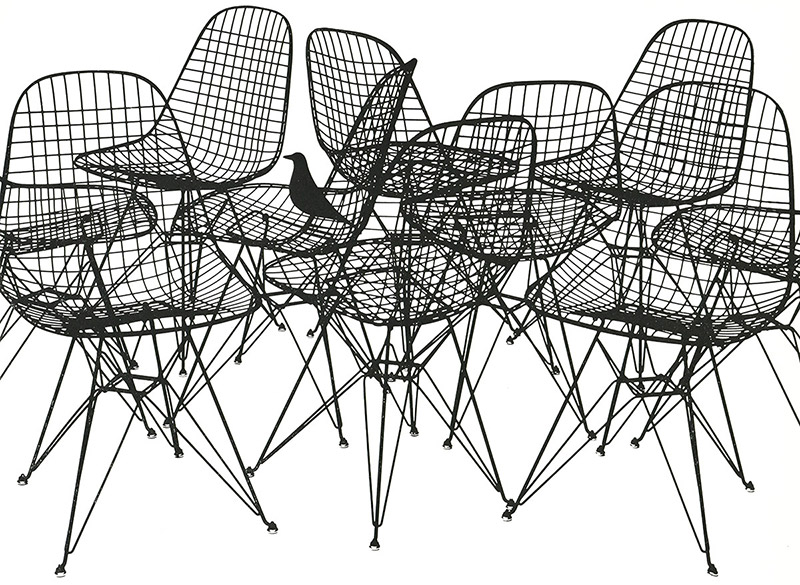 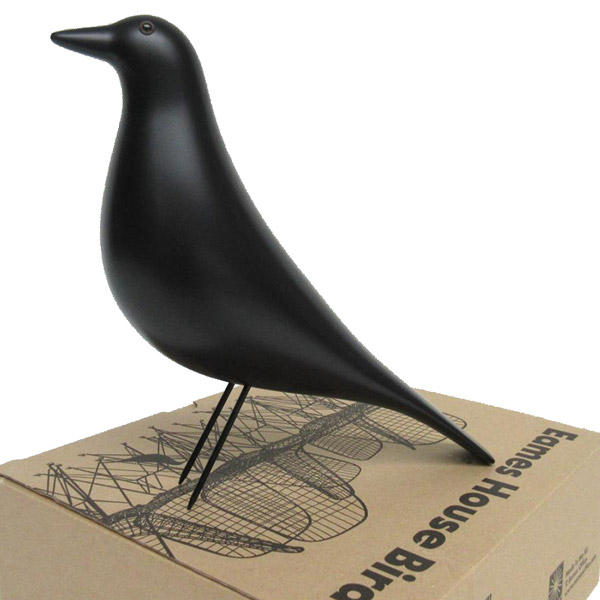 Fast forward fifty years and the evolution of the House bird begins. Vitra, the European licensee of original Eames furniture designs, begins the reproduction of the bird and so names it the 'Eames House Bird'. Made using black painted Adler wood, the re-creation was a perfectly sculptured form of the original and was made as an ornamental feature to be produced and made available en-masse to a worldwide marketplace.

Standing at 10.86" (27.6 cm) high, the bird was the perfect size too, never too large nor too small for its purpose and was finished in an unassuming semi-matte finish, meant to give it an 'older' feel and closer resemblance to the original.

For the first time, this beautiful and simple 'eames thing' was available for everyone to enjoy, perhaps to be the center of attention in other homes across the world. Vitra had recognized both the mystery and the love for the bird and gone all out to reproduce it, as they had previously with the plywood elephant and Eames nested child chair, neither of which Herman Miller had ever revisited.

The Adler wood black 'Eames House Bird' has remained on the Vitra catalog ever since its genesis, its popularity prompting the production of cheap look-a-likes from China and beyond. It was however, only the start of the evolution of the bird, with much more to come!

But what about the name?...

...It is contentious, it is debatable and has even been described as confusing by some. Could it merely be a case of 'syntax interpretation' or was there a deliberate blurring of the marketing lines to provide a greater desirability?

Not everyone has been lucky enough to visit the Eames House in California and hear the origins and mystery of the bird. It could be easily argued that the product being called the 'Eames House Bird' sounds very much like an original Eames design, devised, made and created by the legendary duo.

Perhaps it should be an 'Eames-House Bird' instead, connecting the Eames with the House together to read as the 'bird from the Eames House'?

There is also no mention of its roots, of Perdew, of the Crow Decoys. Should artistic merit (or influence) be given, should the Eames name exist on the bird at all? They have all been debated, but nevertheless, as a product, we absolutely love it and love the fact that we can all now enjoy it and find a place for it in our own homes.

As the evolution continued, Vitra released a polarized 'Eames House Bird' in a lacquered white finish, changing the face of the crow/blackbird into one that more resembles a dove, and to great affect too.

But over the years, Vitra have proven on many occasions to be the masters of the 'limited edition' collectible. They introduced a re-engineered modern version of the Eames Plywood Elephant, using the original materials, in limited numbers, as well as the famed nested kids chair too. The tactical increased marketability of the 'already desired' object as a limited piece is a winning combination that certainly appears to resonate with buyers and collectors.

The evolution of the Eames House Bird received the same treatment. From being initially reproduced and then polarized, it has since gone on to reach even new heights. Another step along the road was to produce a bird made with solid Walnut, complete with beautiful visual grains. This gorgeous new arrival whetted the appetite of Eames followers, tickled the fancy of collectors and gave the House bird another incredible dimension.

But the evolution of the bird finally reached its pinnacle, finally found a resting place at the top of the tree. Created with a limited worldwide number of only one thousand pieces, the Eames House Bird in Gold Leaf was born! It arrived, it mesmerized us, and then it was gone, flown as quick as we could blink our eyes. The Gold Leaf Bird was something of an enigma, an instant universal hit, drawing in the collectors and enthusiasts the world over, selling out as quick as the flutter of wings.

What a long way it has come, that humble bird. From a travel weary souvenir, through the revolutions of change and evolution, to a bright and beautiful gold flyer that tripled in value the moment the last one was released to the wild. Just as we will never know the reason why Charles and Ray Eames loved the bird, we may never know ourselves, but we do, and we will. 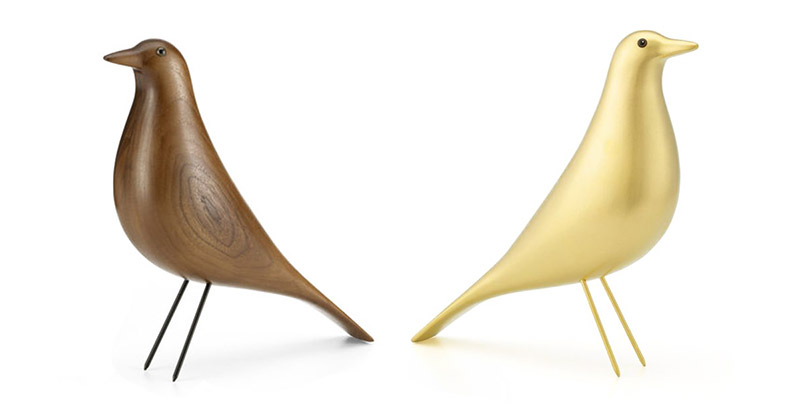