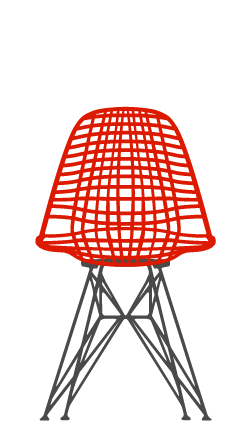 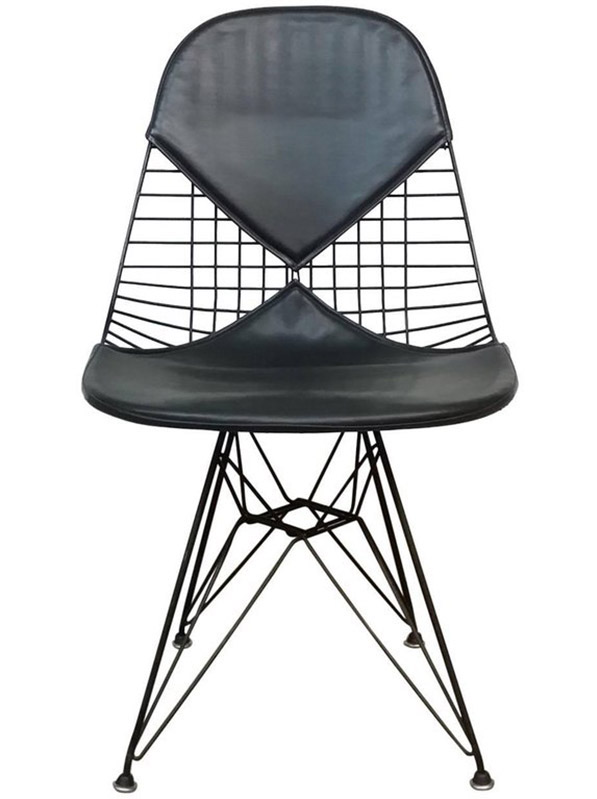 Part of the Wire Mesh series, the abbreviated Eames DKR Chair stood for Dining (D) height, K-Wire (K) chair, on Rod (R) base. The DKR-1 and DKR-2 are the exact same chair however the number represents the patterned shape of the upholstery cover.

Released in 1951, the Eames Office was finally able to realize their aspiration of bringing to the marketplace a chair made primarily in metal. Even the plastic series chairs which preceded it were originally intended to be metal before the advancement of fiberglass. The manufacturing work was completed by Banner Metals of Compton, California, for Herman Miller.

Much of the work had already been done as the wire mesh series would use the same bases found on the plastic chairs. They would also utilize the same shape and design in the top of the side plastic chairs. There was of course, no arm version made. As well as the Eiffel base, the Eames DKR Eiffel Chair was also released on dowel base (DKW), Cats Cradle (LKR), rocker (RKR) and two sizes of X Base (DKX & MKX). Later the cast pivot base was also added to the series (PKC).

The DKR-1 and DKR-2 were different only in the upholstery style. The padding of the DKR-1 Eiffel Wire Chair was like the early plastic chairs, with a removable cover to only the front facing seat part. The DKR-2 had a new upholstery design, with two pieces, one on the seat and one on the back, tied by a button in the center. The shape of the cover for the DKR-2 is what coined the phrase the ‘Bikini’ chair for it’s resemblance to the fashionable swimsuit. The chairs were available in a range of factory fabrics, designed by Alexander Girard.

Collectors find most of the Wire mesh chairs found today no longer have their original covers. This is not so unexpected considering the age but those found with them intact and in good condition are always those most sought after. Herman Miller released an outdoor version in 2012 with the abbreviated code DKQR.

Hot on the heels of the huge success of the fiberglass Chairs came these, the Eames Wire Side Chairs. Just like the fiberglass chairs, the wire chairs were customizable on the same base choices. They were also available with two seat pad options, the flat pad (model DKR-1) and the split pad (DKR-2).   The DKR-2 was nicknamed the 'Bikini Chair' due to the visual resemblance and a recent edition is featured in our video. 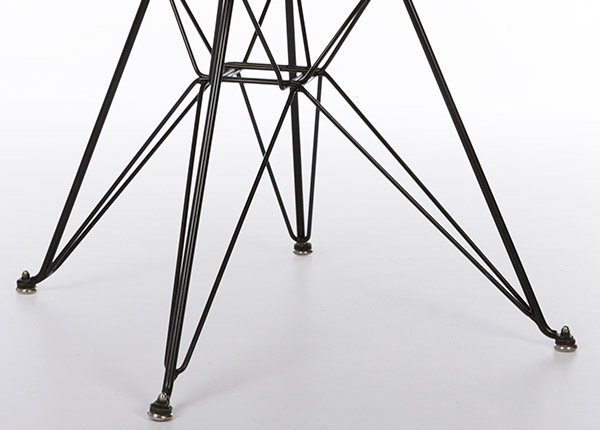 The first release of the base had the distinctive 'splayed' feet, put together with a hexagonal nut.

The first generation base was only released in black option 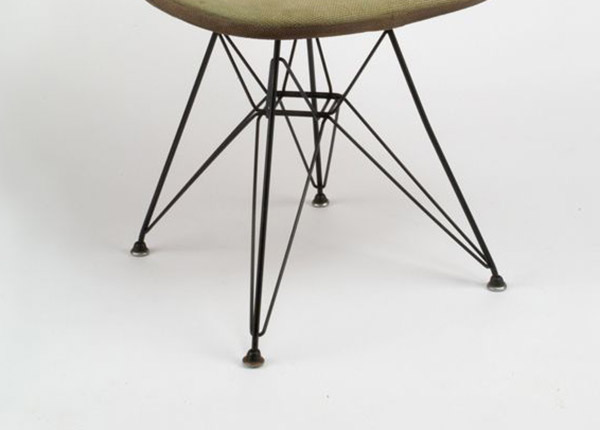 The second release of the wire rod base had balls welded onto the end of the struts in order for a simple two piece foot glide to be pushed into place. 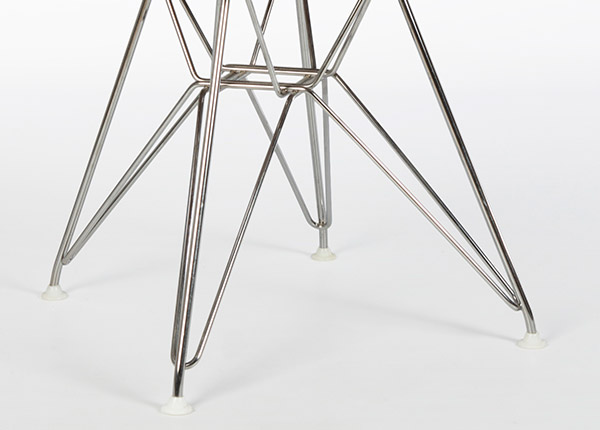 Third and current generation clip on nylon glide DKR base

Later into the 60's and the bulb feet were replaced with simpler black plastic floor glides that clip on to the strut end. They were available in both black and white and had no aluminum as the previous feet had.

The wire frames of the seats and bases were available in black or zine plating but later post 2001 are also available in white. Herman Miller also released an outdoor version of the chair in 2012 thus extending the generation further. 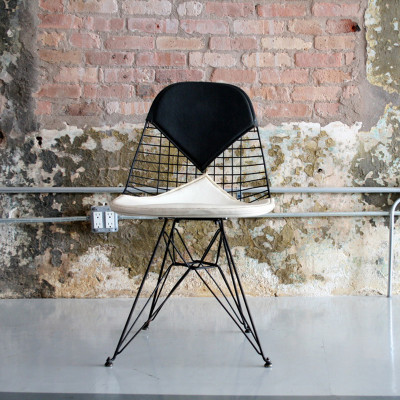 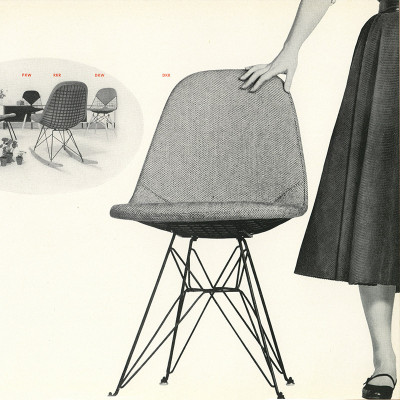 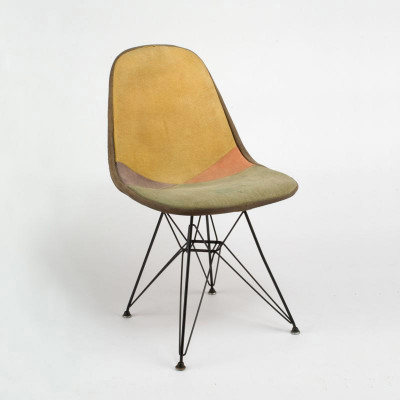 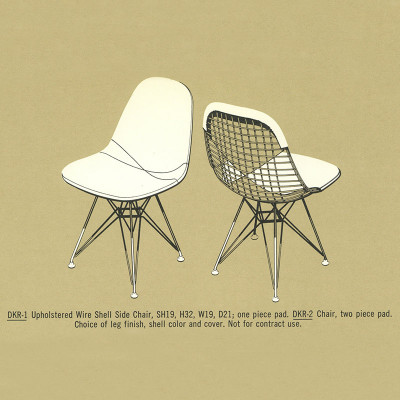 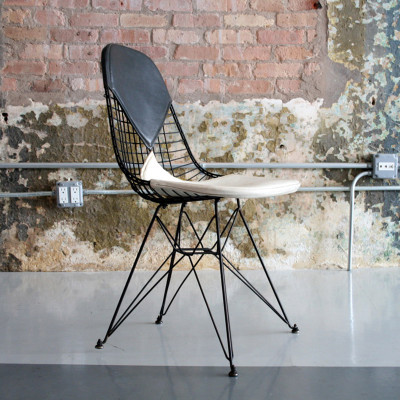 DKR-2 1st generation Side View (image courtesy of Circa Modern) 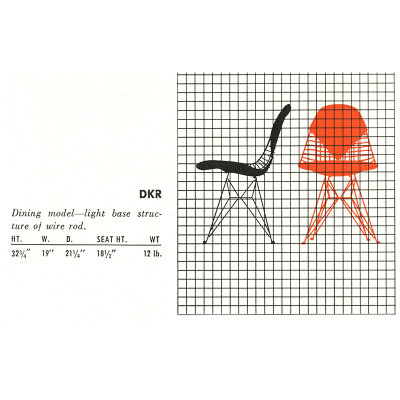