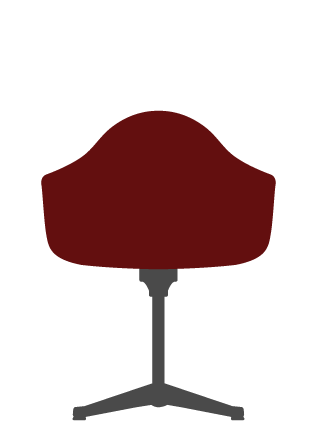 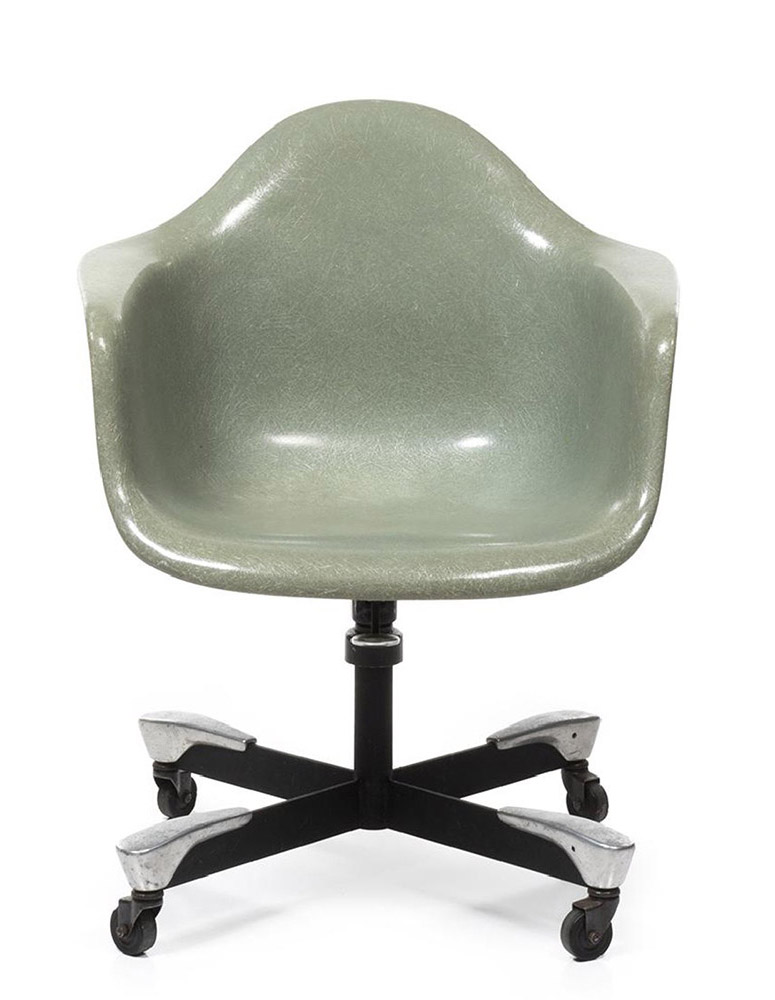 The abbreviation Eames DAT Chair was given for the Desk (D) Height, Arm (A) Chair on Tilt (T) Base. The chair was brought to the market in the ‘second wave’ of bases in late 1952/1953 and lasted over two generations of the base until the end of the fiberglass chair series in 1993.

Along with the PAC, the DAT represented Herman Miller’s first fiberglass venture into the ‘desk chair’ market, something in which the company would excel in by the late 1970’s and 1980’s.

The first generation of the Eames DAT Arm Chair encompassed a unique lateral cross base not used on any other chair, finished with aluminium foot guards. This beautiful base was visually very different from the rest of the plastic chair series and due to the modest numbers sold, is quite a rarity to find. The chair was the first to have castors and the tilting of the base was controlled manually by way of a rubber torque mechanism. The seat height was also adjustable via a manually controlled central thread on the column.

Given that the DAT had everything one could want in an office/desk chair, it wouldn’t be wrong to class it as a precursor to the hugely popular and bestselling Alu Group office chairs which are still made to this day.

1957 saw a great shake up in Eames designs with the introduction of the pedestal ‘contract’ bases of the aluminium group chairs. These bases were hugely versatile given that they could take either a castor or a glide and gave perfect stability. It was no surprise therefore to see the base replace the originals of the DAT and PAC and become the stable ‘contract’ base type for desk and office chairs. Post 1957 saw the version DAT-NC which simply meant a DAT with no castors, using the contract base.

As the Eames Tilting Arm Chair spanned the generations it can be found in all shell colors and those with Alexander Girard designed upholstery from Herman Miller. 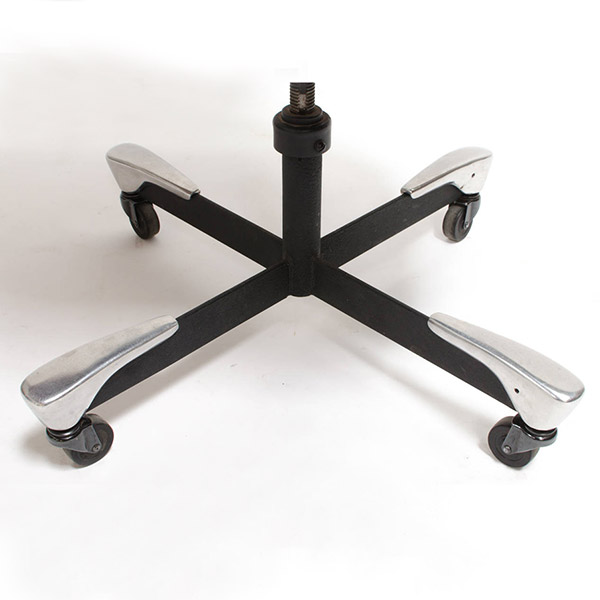 The base used bright polished Alu foot guards to dress the base legs, the result is a very unique look

The Tilt mechanism was adjusted using the cast knob on the underside and tightened to the desired angle. 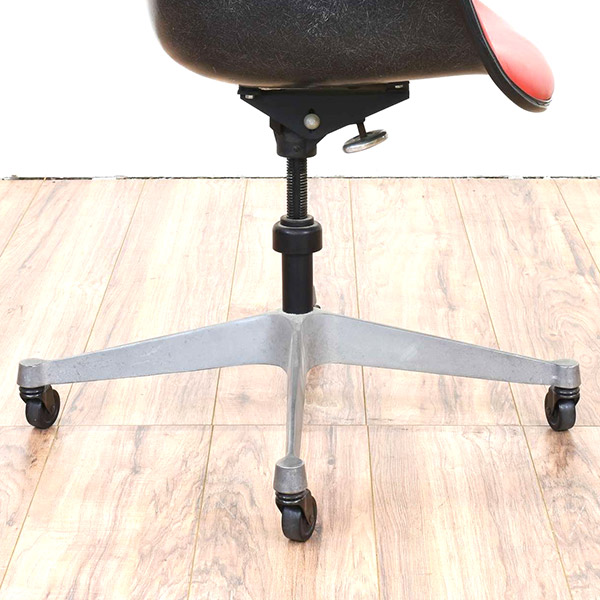 Like the PAC and PSC, all work chairs were moved onto the new base 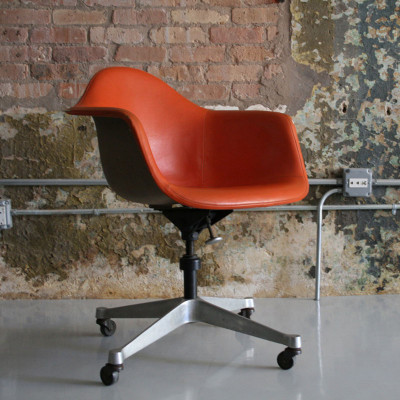 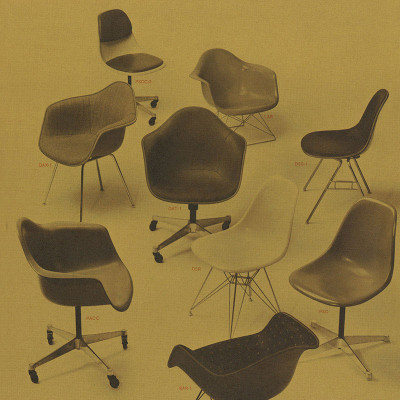 1959 Vintage Herman Miller advert with DAT in the center 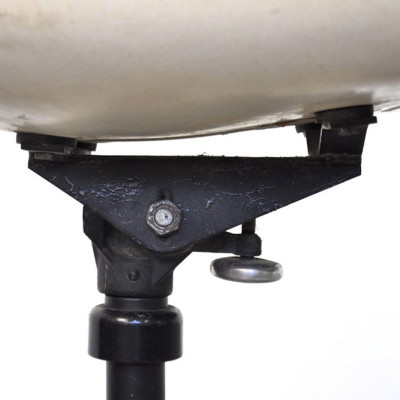 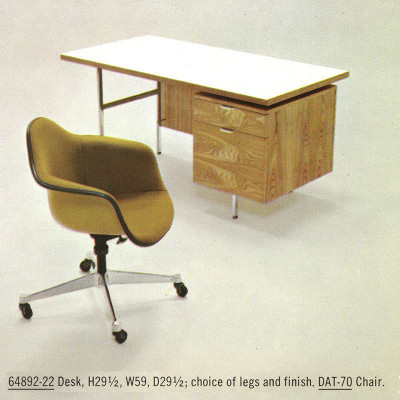 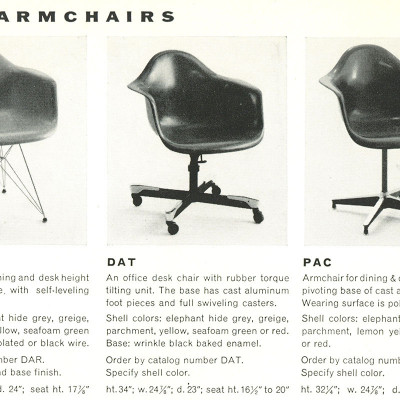 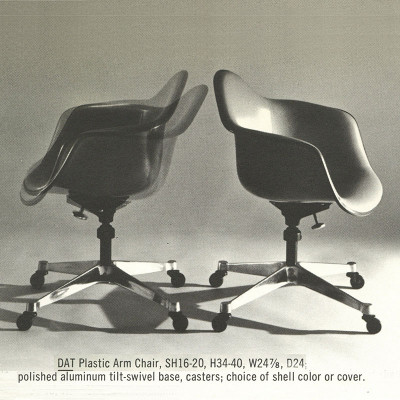 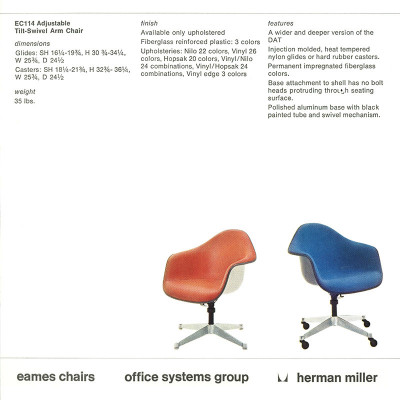 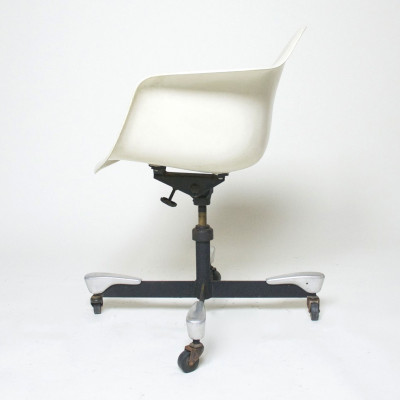