It would be furniture for little ones that would mark the commercial debut for furniture designs by Charles and Ray Eames in 1945. A series consisting of a chair, stool and matching table were made from the molded plywood forms so well developed during the war years in collaboration with the Evans Molded Plywood Company.

The success of the Eames children's furniture series was limited largely because the Evans company lacked the distribution network and knowledgeable know how in order to sell furniture. Only 5000 pieces were made and sold around the US making the Eames kids furniture pieces one of the rarer finds for today’s collectors. 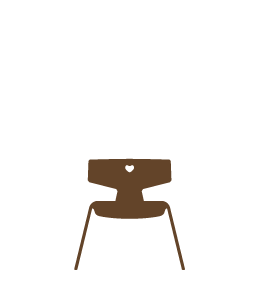 The nested series of Eames children's furniture was released in 1945 to 1946 to a handful of vendors in major cities including New York and Chicago. The kids chair was the most popular in the range, a beautiful organic shape with unusual curved wood veneer and a carry handle in the shape of a heart. The new material that had been developed during the war years was perfect for molding into shapes that could ergonomically follow the contours of the body (one of the very aspects of design that ultimately led to the success of Eames furniture as a whole).

The nested Children’s Chair was very small too, measuring in at just 14.5 inches in height. This piece of Eames Children's furniture was available in either a natural wood veneer or in a handful of dyed colors including red and black. The Chair has become something of an enigma for collectors with sums at auction reaching very high prices if the condition remains excellent.

The matching stools and table in the series were made in even less numbers than the chair and thus are likely to be even harder to find today. They were designed to complement each other, and the stool could be used on its own or as an accompaniment to the chair. Sets found complete and without damage are very sought after and valuable today.

The experimental plywood forms were also used to create a series of animals meant as sculptural toys and stools. From the handful of designs made, working prototypes were only made of the elephant and the horse but neither would be manufactured for general sale for almost seventy years. A limited run of 2000 pieces by European manufacturer Vitra would become the first to finally reach the market in 2007.