The Art of Charles & Ray Eames

The Art Of Charles & Ray Eames

Q. Would it be wrong for us to say that all of what Charles & Ray Eames achieved in their lifetime was art?

Let us not forget that some of the most notable designs and pieces for which the Eameses are best remembered were huge collaborative efforts. From the members of the original Eames Office, to the research and development of Herman Miller (and others) and to the upholstery of Alexander Girard. But then there was the concept, the idea, the expression, the drawings, models, mock ups and marketing. Art was everywhere, by everyone and all around, and in this article we discuss and explore the Art Of Charles & Ray Eames.

We would do well to remember the creative roots of Charles and Ray Eames. The architect in Charles and the painter in Ray are long since factually recorded but the bare bones in each of those disciplines is an artistic streak only afforded to those that were born with the gift or worked hard enough to attain it.

So we know that Ray created covers for Art & Architecture magazines, textiles, patterns for serving trays, sculptures and more. We also know that Charles made many films, designed buildings, houses and furniture.... 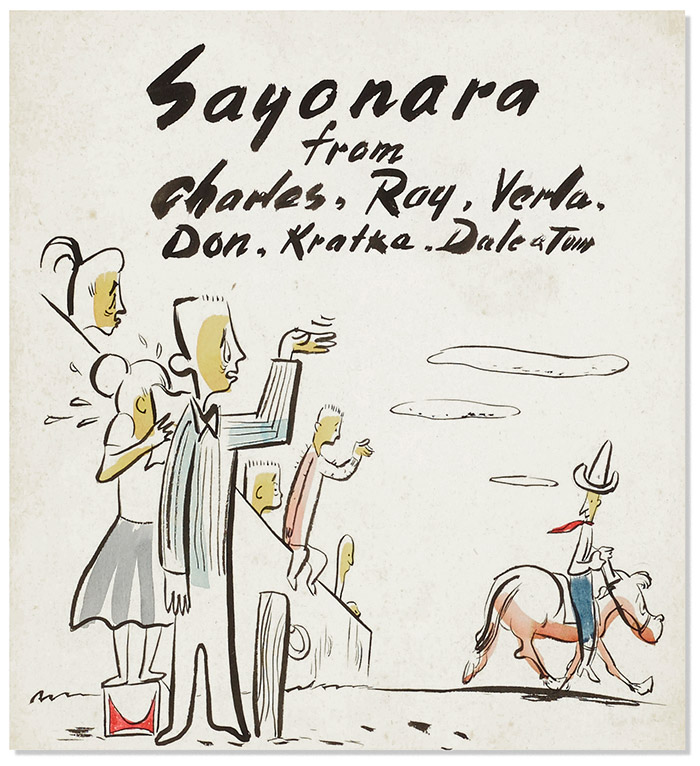 Beautifully drawn picture by Ray Eames of herself (standing on a Herman Miller box), Charles and the members of the Eames Office waving so long to colleague Phil Lewis as he leaves his post. (courtesy of Steve Cabella) 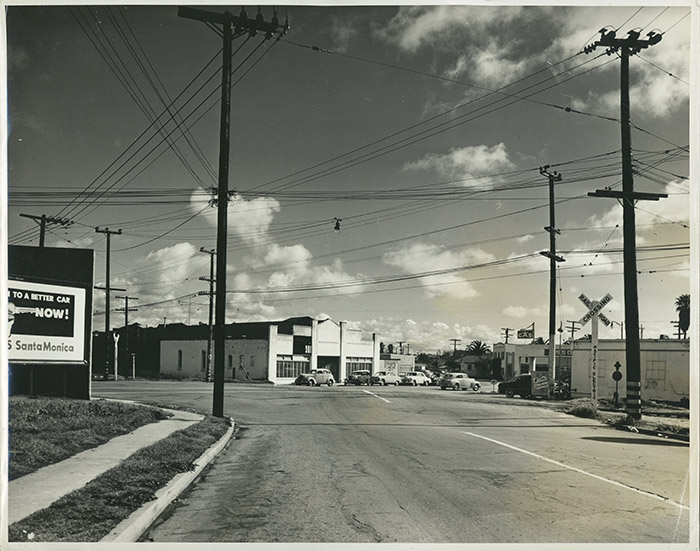 An original Charles Eames photograph of the Office, recorded and stamped on the reverse

A Quest For Art

It was a beautiful, clear and sunny day in Northern California the day we went to see Steve Cabella (Eames historian, scholar and lecturer). Nestled on the banks of the bay in a Mid-Century house Charles himself would have been proud of, we were afforded the opportunity to look, feel and marvel at the art of Charles and Ray Eames. It was difficult to look past some of the array of extremely rare and unique furniture pieces Steve had collated over the years but it was art we had come to see and it was worth every step to find it.

From Ray Eames' Sayonara drawing for Phil Lewis to the photographs of the Eames Office taken by Charles Eames himself, these were real pieces of fragmented history, penned, drawn or taken by the protagonists themselves. But it was in the paintings that the imagination was more deeply captivated. The brushstrokes on canvas, the colors, the subject and the vision and the skill, all laid bare on the canvas and for the purpose of nothing more than creating that image. It is well recorded that Charles painted and that he did so to fund his travels at times so it is a wondrous thought that out there somewhere are more yet undiscovered works waiting to be found.

One of the original Eames artworks we had the pleasure of seeing was one entitled Windy Monday. Steve explained that he was fortunate enough to acquire the painting from the family of Charles, from the St Louis area, where he was born and raised. He also explained that the subject matter was that of a St Louis suburb of the 1930's, two ladies struggling to complete the chores of their lives with the winds on a given Monday.

Whilst some may not find the subject matter to their liking or even the technique especially endearing, there is clear evidence of an artist at work. The scale of the subjects, the frame within the image, the effect of the brush strokes, the depiction of the wind, the ramshackle of the existence - is all well captured and defined. It is clear too that Charles was happy to show experimentation. Many of the art pieces that have surfaced have all been different, using and utilizing varying styles and techniques; all the hallmarks of an individual destined to try everything to succeed.

The owner of the painting, whom acquired it from Steve Cabella, remarked by interview that:

"It is one thing to hold and own something designed by Charles Eames, and lets face it there are many great things designed by him, but the art, the art is one off, painted by the hand of the man himself. That he sat and took the time to deliberate the image, the location, the color, the execution and sign his name to it, brings you closer to it"

The painting is signed to the front using oil paint and to the rear in his eloquent and beautiful hand writing which almost appears to roll with consummate ease. The painting is also dated and was put to canvas in 1930. 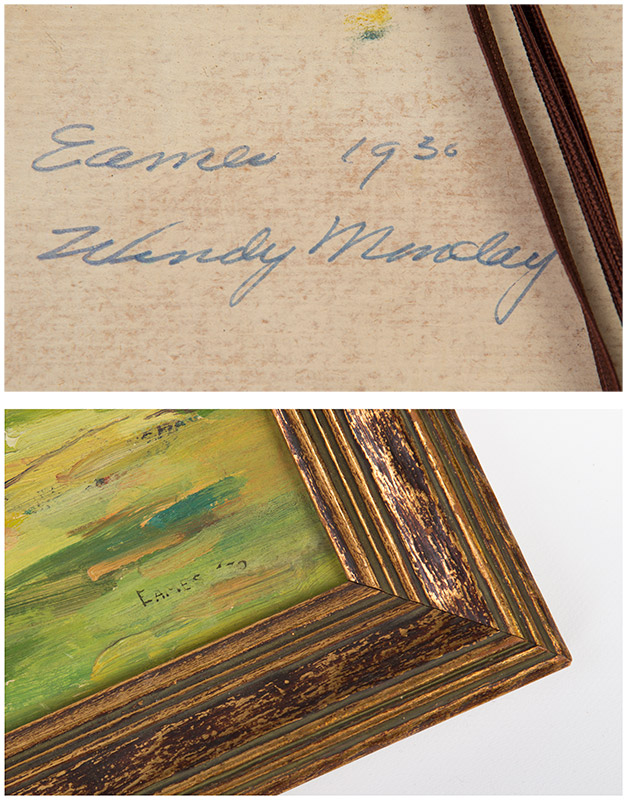 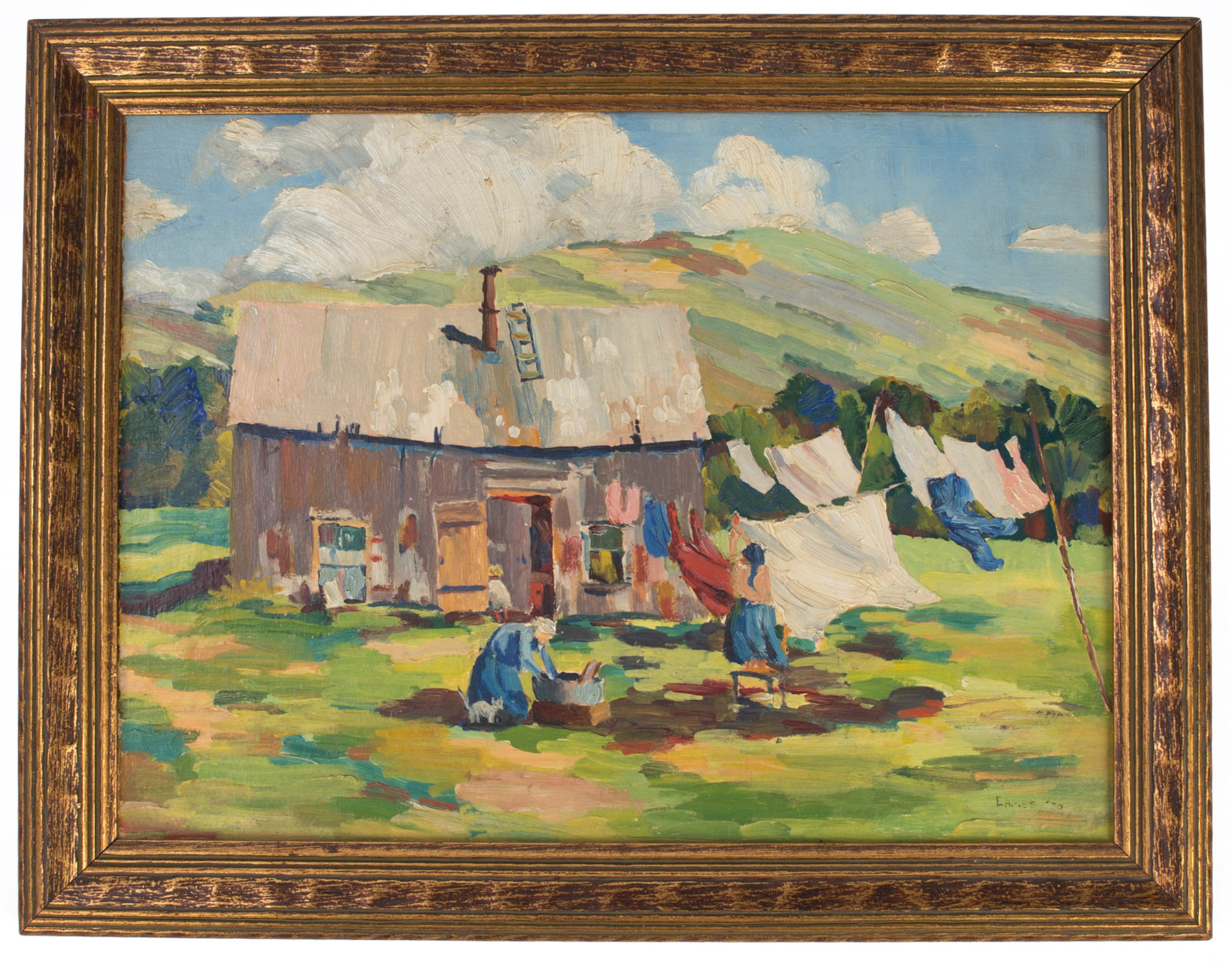