The Eames Office was very prolific in creating ranges of seating tailored for mass installations such as stadiums, theaters, lecture halls and congregations. But there was another commercial style of seating that had an even more specific purpose, characterized by being linked together and customizable, it was known as Eames Group Seating.

The Eames Group Seating had the purpose of being installed on a semi-permanent basis, for multiple uses in varying situations. They were heavy duty and maximized the number of seats by ensuring they were closely compacted together. They were durable and would last for many years, fulfilling their purpose perfectly. 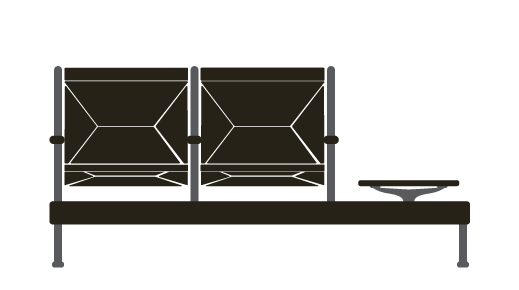 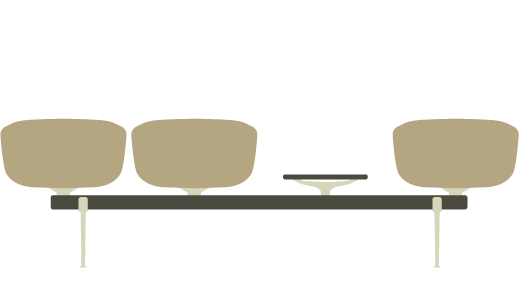 Both of the two marketed Eames Group Seating ranges would arrive in the earlier 1960’s, a time when the commercial demand for Eames Seating was very much in full swing. One was borne for a specific design need, airport seating, whilst the other was very much open to being used in a variety of possible places.

The first Eames Group Seating was released in 1962 and became known as the Eames Sling Seating. It came about as a concept because of the needs of both Dulles airport in Dallas and O’Hare airport in Chicago for new terminal seating. The Sling seats would essentially be made in bays, all running along a single heavy steel frame. Each bay could consist of either a seat or a table and the arrangement was entirely customizable. The slings were also available in back to back configurations for even more space saving.

The Tandem Sling Seating backs were very distinctive, with an elongated cross to the pattern of the seat which effectively split it into four sections. The Sling Seats were made from toughened stretched Naugahyde which is what provided the durability they required for long term and potentially heavy use. The Sling Seats were available in lengths from two through to ten bays in length and are still made by Herman Miller to this day.

Using an almost identical in principle frame as the Sling Seats was the Tandem Group Seating released a year later in 1963. This time the same principle would be applied to the already hugely popular and successful Eames Fiberglass arm and side chairs. The fiberglass series was already using an intelligent system of identical fixing points to the underside of all its chairs, whether arm or side, standard or La Fonda shape. This meant that they were perfect for a system of customizable group seating as they could be used in any combination. Tables fitted with the same fixing pattern would also be made for the Tandem benches meaning that they were again available as part of the setup.